Sunday proved to be a drizzly day with overcast skies. After a bowl of Kashi cacao cereal and skim milk, I drove down to Plano's Chisholm Trail, off of Rainier Drive.

The trail there is a sidewalk along a creek. The creek has been guided with walls into becoming almost like a little rivulet or lake.

I saw numerous birds there, including several varieties of duck. I enjoyed seeing my first Barn Swallows of the year, and seeing again a Northern Rough-Winged Swallow. I got a fair number of pictures of a Yellow-Bellied Sapsucker. 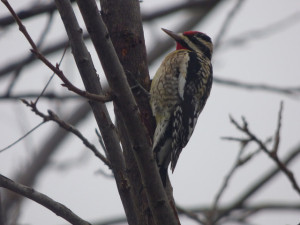 I went to Weight Watchers, where I was up 2/10ths of a pound. Then I headed home, as I had forgotten my cell phone. Though I can do without a cell phone, I like to have my step-counter app to monitor my exercise.

At church, the pastor for the Way chapel service began a series on phrases people treat as Biblical but which lack a Biblical origin. This particular sermon dealt with variations of "This was meant to be", which led to a discussion among the congregants on the theme of predestination. I listened but did not say anything during this interesting service. The regular pianist had called in sick, leaving the minister, who is musical, and the choir director to alternate on the piano and a little organ.

After church, I went to Casa Taco for three soft tacos. Then I drove to Celebration Park. The intermittent light rain caused me to put on my rain windbreaker. The park had dozens of Ring-Billed Gulls, Mallard Ducks and Great-Tailed Grackles. When I walked on the Celebration Pass, I saw a Carolina Wren. 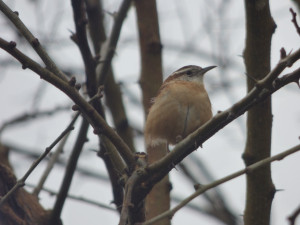 In the late afternoon, I took Beatrice for a walk. In the evening, we watched "Victoria" on Masterpiece on PBS. There certainly seemed to be a bit of an open season on deranged gunmen in Victoria's life. I enjoyed the first season finale. We ate turkey Reuben sandwiches on seeded rye bread. I also read about the photographer Olive Edis and the region of England known as the Norfolk Broads. The local news here is filled with the president's effort to conjure up new controversies, in a way that seems a bit like the 2011 birth-certificate debate.

I have a regular physical at 2 today, so I had my oatmeal some 8 hours before the appointment.

I ate my oatmeal early this morning, as I labored under a post-6-a.m. doctor's moratorium upon eating. I worked until 12:30 p.m. Then I headed to the southern part of Dallas. I took a business call at 1 p.m. in a parking garage. Then I walked to my doctor's office for a 2 p.m. appointment. I like my doctor, who has helped me for roughly a decade and a half. We are both older now, but of the two of us, only I look much older. The appointment went well, though a routine physical is always a mystery until the labs come back. My doctor decreed that I should not lose more weight.

As the tech drew my blood, I looked out the window. I saw a small raptor feeding on another bird. I was spared seeing the second bird, but saw a few white feathers. I pointed it out to the technician who, when we were finished with my blood draw, went to point it out to a co-worker. Birds are everywhere, but an eye to see them is not always everywhere.

On my way back to work I got two soft tacos at Casa Taco or Taco Casa, I am never sure of the name. At day's end I stopped by Salmon Park. I saw dozens and dozens of blackbirds. I could not see their red-wings, but I know they had them.

My wife had a meeting tonight. I got chicken at Chicken Express, along with a roll and corn-on-the-cob. I watched "Supergirl", and am now watching an episode of "Foyle's War".
Collapse