I got up early Saturday. A Super Shuttle picked me up at 6:18 a.m. I read a novel during the long wait at the airport for my 9:15 a.m. flight. I read a different novel during the flight itself, Mrs. Oliphaunt's "Last of the Mortimers"

When I landed, I caught a cab to the northern part of Tucson. There I met up with my wife and her step-mother. We dined on chicken sandwiches. Then my wife and I headed from a relatively hillside place to Rillito River Park, a wash place where the river is almost always comprised of sand, except when a monsoon hits.

We walked for 90 minutes. We saw so many things--Anna's Hummingbird with its iridesscent face, a Red-Tailed Hawk with a rodent prey in its talons, lovely ground squirrels, and a Vermillion Flycatcher. 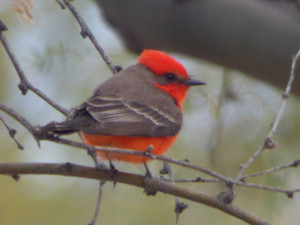 When we finished there, we went to an art gallery with some wonderful photo-realistic portraits of inaginary people and some cool desert-themed outdoors paintings. It was not at all cliche or trite work. We liked the gallery owner, Tommy.

We headed to Tohono Chul, a desert botanic garden. We walked the paths by ourselves, as the chilly, breezy, drizzly weather kept most people away.
We liked the museum gallery, with cool local artist things. We liked the Lesser Goldfinch birds. I bought a pen at the gift store--I had forgotten one to record my bird sightings. The only one they had featured a plastic handle with orange and green plastic plant spikes giving way to let's-pretend plant "bloom" at the end. It wrote well.

We had a bit of adventure just before we left for dinner. I stepped out into the very small courtyard to my wife's step-mother's Tucson place. a Bobcat, perhaps 2 meters from me, jumped up over the little four-foot adobe wall. I peered through the little gate, and there it was, curiosity getting the better of it, looking back at me. Then it headed off.

My wife's step-mother will institute some extra caution with her two Shih Tzus, but otherwise it's just interesting that the bobcat was there, the first one she has seen in her 15 years of Tucson visits.

Because I had little biscoff cookies on the plane, three chocolate covered flat little pretzels at lunch, and two Tate's chocolate chip cookies after dinner. Between those and the three enchiladas rather than two, I exceeded my daily Weight Watchers smart points by a good margin. But that is what the weekly "extra" points are for. When I get on the scale tomorrow night or so, we'll see if I gained weight. I just write it down and see what happens--a bit like a science project.
Collapse