Friday my morning started with a breakfast of eggs, a few roasted potato fingerlings and fruit from a buffet. A kind staffperson not only let me know a vat of eggs was made with cheese,but also brought me simply-cooked scrambled eggs.

The Friday seminar talks were very good. I also enjoyed saying 'hi' to lots more people I have known over the past thirty-two years of law practice. Though there were perhaps only a few dozen out of 200 attendees that I really "knew" or "should have known", I felt like I knew lots of people. When one's mix of introvert and extrovert runs a bit on the introvert side, it does not take many contacts to feel joyfully inundated with acquaintances and friends. I enjoyed seeing my former law partner Kathleen, for instance, whom I perhaps had not seen in a decade, though we are social media contacts. She has done well out in Los Angeles, but has worked on similar things but in different states than I have done. As she said, it's odd to work long hours with someone for years and then not see them for years. But it was good to talk with her this trip.

I spoke with a few of my former colleagues, and was pleased that one seminar featured one of my former law partners explaining what sounds like excellent work he did on a matter out east. I liked that he told the story in a way that kept the story central, and not his important role in it.

The seminar ended at 12:30 p.m. I gathered my roller bag, shouldered my little computer bag (bought at Goodwill for a few dollars) and walked a mile or so to the Hyatt Regency on Barton Springs by Lady Bird Lake, the huge river-looking lake that runs through Austin's downtown. On the hiking path there, I reached for my camera because I saw a Ruby-Crowned Kinglet, but when I had it in hand, I saw this Northern Mockingbird: 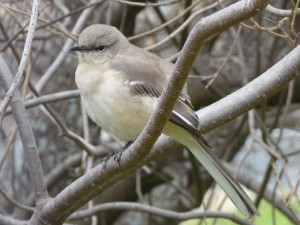 The mockingbird was singing, but I had not seen him at first because he was nearer eye level, i.e., "right in front of me".

At the hotel, I ate a bowl of chicken tortilla soup at the little cafe/bar there. They accidentally served Dr. Pepper instead of Diet Coke, but we soon got it corrected.

Due to a scheduling error I made, I was on a 6:45 p.m. bus and on standby for the 2 p.m. bus. To "stand by", I elected to go stand near the line for the bus.
To my delight, a seat came open and I got to go on this bus. This let me get work done, have a pleasant journey, and get back to Dallas by 5:00 p.m. The Vonlane bus line quite sold me, with comfortable seats, a bus attendant handing out tasty snacks, an AC plug per passenger, and free wi-fi suitable for email and light internet tasks. I enjoyed sitting back, absorbed in work tasks and a bit of avocational business, but also able to just look at the February central Texas fields out the window.

For dinner, my wife and I tried Saravanaa Bhavan, a new outlet of what I learned was an Indian chain vegetarian restaurant, which recently opened one town over, a few miles from our home. We ordered a combo platter to try a sampler. We got metal plates with some things familiar to us--masala dosa and carrot halwa--and some things unfamiliar to us--Idly and Riva Kichadi. We liked it,though I found it hard to convert it to Weight Watchers points. I enjoyed reading at home of the composition of each of the dishes. We went to sleep early. I watched an episode of "Blue Bloods" and turned off the television.

Soon I put on a suit and head to catch the train to downtown Dallas, where today is the high school mock trial regional semi-finals. I will sit in the jury box and rate the participants. Some of them will be more polished at trial than I am, and that's pretty cool.
Collapse