I woke up this morning and ate fat-free frosted flakes from some suitably healty gluten-free place. I headed into my office, got half a day's work done, got in my car, headed to the Doubletree Hotel in Dallas across from Love Field. I stopped off at Golden Chick, which only had outdoors seating. But the weather was just right for the outdoors.I had grilled chicken, green beans and half a roll.

My VonLane bus from Dallas to Austin ran at 2 p.m. It came with wi-fi and AC electricity, which gave me the ability to work during the three-hour-and-thirty-minute drive. I was very impressed with this new bus service. I did have one glitch. I inadvertently set my return for March 3 instead of the day this week that I am returning. I called, got it re-set, and then learned later that the last seat on the bus I wanted was gone. No big deal--I will travel 2 hours and 45 minutes later.

I walked from the hotel where the bus stopped to the convention hotel. I found at the cocktail party that I knew lots of people from cases past, and met people I had always wanted to meet. I do not drink cocktails, but I found the company intoxicating. Two colleagues invited me to join a party for dinner, where I had an 8 ounce filet mignon, a heritage tomato salad with mozzarella, broccolini, a little bit of brussels sprouts and a delicious heel-piece of sourdough bread from a great restaurant whose name escapes me. I enjoyed the conversation, which ranged from birds to Mexico to kids to the S & L crisis.

I walked to my hotel, had a nice call with my wife, and settled in to rest.

Here is the cute yellow-rumped warbler I saw in my office's parking lot today: 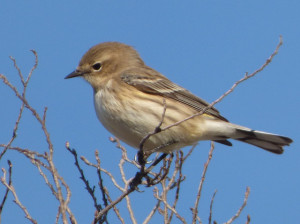 My work as an attorney deals with a few disparate somewhat arcane aspects of civil trial and receivership law. A description of one of my cases might make the average eye at the average dinner party glaze over. But my work interests me, which is, I theorize, the essential thing.

Today I was in downtown Austin for a conference in my field. I breakfasted on fresh fruit and scrambled eggs. I really enjoyed the speakers. I got to see old friends and business acquaintances. Contrary to custom, I signed up for this seminar by specifying a dietary restriction--"low fat". When I checked in last night, the seminar folks gave me a special card to give to the lunch serving staff to let them know I was special. I duly did so when my salad was served. This bold step netted me a truly non-fat entree--a second dry salad, but with nice little orange pieces and a bit of almonds. I rather enjoyed my double rabbit meal--the orange pieces, the almond bits and the wheat roll were great.

At dinner, I went with colleagues to Perry's, a restaurant known for huge pork chops.
I ordered a grilled salmon with a dry baked potato and asparagus and the heel of a sourdough bread loaf, but a friend gave me a couple of ounces of pork chop, which lived up to billing. The portion was so large that I would have to be accompanied by three companions to order that dish.

In the margins of today, I got some work done, and mapped out more things I need to do. But for now I am enjoying learning things and seeing people I like. Tomorrow afternon I will be glad to catch my bus home.
Collapse