Falling back asleep is always risky.I This time, I woke up at 7:50 when I wanted to wake up no later than 7. I had already had my cheerios and skim milk. Still, I was delayed. I made it to work a bit later than I wanted to get there--at 9:25 a.m. But I got a lot done today. I went to Cici's for pickles, carrots, raw broccoli and two slices of pepperoni pizza. I walked in Bradfield Park, where the air was warm and he sky overcast--usually a harbinger of active birds. But today it was relatively quiet. Then I saw this Cooper's Hawk: 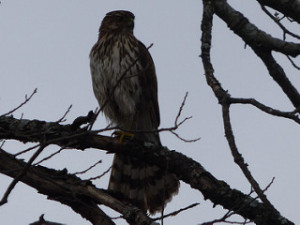 I stopped by Breckinridge Park to walk a bit after work. A cold front was coming in as I got out of my car, and I felt the sharp temperature drop immediately and progressively.

I forgot to bring my cell phone to work today. I felt a little bare. I recall in the early, pre--smart days of cell phones, when leaving one at home was a delightful way to avoid unwanted calls from work. But not now. My cell phone is back with me now.
Collapse