The high temperature today was a bit over half the number of degrees Fahrenheit of the temperature on Monday. In Celsius, I suppose the multiple was closer to 10x.
The wind was light today, though, which, in this more-windy-than-Chicago area, matters a great deal.

After a breakfast of multi-grain Cheerios and skim milk, I headed into the office.
The radio news broadcast today informed me of a shooting in my local town. Young folks here in Allen allegedly got into a social media taunting match with young folks in Dallas. The back-and-forth reportedly caused the Dallas folks to drive 25 miles north to confront the Allen folks. A shooting, causing no life-threatening injuries, apparently resulted, per the local radio. It is not clear if it was a shooting with guns or a shooting with a less lethal air rifle. For that matter, I am not sure if the news got it all right at all. Our suburb is very low-crime, but things can happen anywhere.

During lunch, I walked in Breckinridge Park a bit. My Fujifilm camera, which lasted me some years, bit the dust on Monday. It got that syndrome in which the lens will no longer zoom. I had previously, though, bought a used Panasonic Lumix 60x optical zoompoint-and-shoot at a bargain price on eBay for just this eventuality. So I charged it up and gave it a try. I took pictures of this charming Eastern Bluebird: 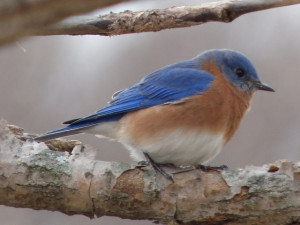 After work I walked a bit in Timber Narrows Park in Murphy. Already the days are getting slightly longer. My wife called me and suggested we each fend for ourselves for dinner. That way, she could shop a bit. I went to Market Street, where I had grilled tuna, potatoes, and turnip greens with a dinner roll. I bought Powerade Zero, green bananas, and Quaker Lower Sugar oatmeal.

Now I am doing laundry while Chicago PD is on television. But this happened only after I threw Beatrice's toy.
Collapse