The morning began with -8 degree Celsius temperatures. After eating my Kix cereal and skim milk, I bundled up in five layers of clothes as well as gloves. Then I drove to my Weight Watchers meeting. My weight was up .8 pounds, which was of no concern to me. After the meeting, I drove to Shawnee Park in Plano. I managed to get two circles of the small pond before the cold drove me back to my car.

I drove to the church to which we belong, First Methodist Church in Allen. The first order of business was to label the two substantial plastic bags with Christmas gifts for kids at Send Hope, a charity founded by one of the church members which helps kids in the Moskito coast of Honduras. In line with the instructions, I labeled one bag "boy, age 5-7" and one bag "girl, age 5-7". As I went into the church, a nice young woman usher complimented me on the contents of the transparent bags. It was a small thing, but I was grateful that she reassured me.

After church, I went to Taco Casa and had three soft beef tacos. I walked for a little while in Bethany Lakes Park, but then headed down Lucas Road toward Lake Lavon. The lake is a twenty-minute drive from me. The temperature increased to within a few degrees of 0 Celsius. I walked through the fields near the lake. 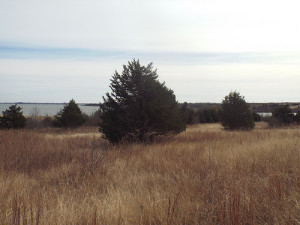 As I was nearly done with my walk, I noticed a raptor in a bare tree. I got a good look at it and realized it was that species of falcon called Merlin. This is a Winter visitor to our area. 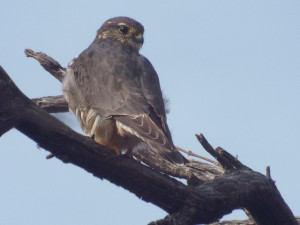 I love to see Merlins, who are a kind of holiday bird, as sure in its way as a holiday cactus to bloom.

I got a long look and many pictures of this raptor, until it flew away. Then I watched some Eastern Bluebirds, who were perhaps relieved that the Merlin had left us.

I stopped by Wal-Mart for some bananas. Then I walked a bit in Allen Station Park, where I took imperfect pictures of a Blue Jay. I went to the nearby Allen Public Library, with the idea of attending the 3 p.m. Allen Community Band Christmas concert. As I approached, though, I saw the library parking lot, which is large, was full. So I decided not to try to go to the concert.

Instead, I went home and addressed a holiday card to a friend. My friend C.Reider wrote a nice paragraph about my 2016 album in his yearly discussion of netlabel releases. I threw Beatrice's stuffed duckling for her. At 4:35 p.m., I drove to little Green Park. I saw a flock of American Robins in a tree, and got some nice pictures.

My wife was still Christmas shopping,so I went to Whichwich and got us each a turkey sandwich on whole wheat with baked chips. Now I am watching a local team play football on television.
Collapse