This morning I had lots of opportunities to do fun things. My local Audubon Society walked its monthly bird walk at the Heard Natural Science Center roughly one town over. The Hagerman National Wildlife Reserve a bit over an hour north featured a talk about our local armadillos, plus, this time of year is Snow Geese and Bald Eagle season. The Trinity River Audubon Society about forty-five minutes south featured a speaker on exotic hummingbirds.

But I decided to do none of those things. I had a mailing for a spot of family business that had gone undone for too long. So after my breakfast of Corn Pops and skim milk, I got that ready to mail. I also addressed cards to those who requested them here on LiveJournal, as well as to a few other friends. Then I headed to the post office. I expected a long line, but it all went swimmingly. One little package I wished to mail overseas had a postage cost which was excessive, so I will have to re-do that one and go back to mail it. But I am pleased to get nearly half my card list handled. Next I will do the family cards.

I did listen to music by:

I drove to the small town of Princeton. On my way, I stopped by a Dollar General and got some low priced Winter caps and spare gloves. I liked that one of the cheap caps had a Chevrolet logo patch on it. That is a kind of apparel with a "Fanfare for the Common Man" vibe. I suppose Aaron Copland is on my mind because I heard on the radio today a recording of him leading a symphony in London through his piece "Our Town".

I walked in its Community Park, a huge open field area with sports fields and a wood and creek fringe. Its claim to fame is that it served as one of many German POW camps on the waning days of World War Two. Nothing remains of the camp but a few concrete foundations. Written history tells me that the prisoners worked on local farms for modest pay. Supposedly, the locals felt the soldiers were young Wehrmacht draftees rather than "true believers" to the cause or SS soldiers. I wonder how much more complex the true situation must have been, both in the soldiers' original behavior and in the townsfolks preference not to believe the worst or near-worst.

The weather was chilly, cloudy and windy. Much of the day hovered around 5 degrees Celsius, rallying only late in the afternoon to 9 or so. No guard towers festooned the park, but this fellow stood sentinel on a sports goalpost: 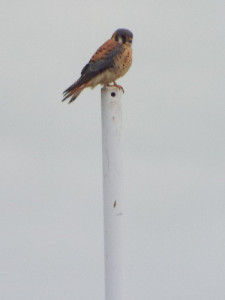 American Robins flocked everywhere. The area near the creek was alive with birds.
I liked the little Yellow-Rumped Warbler among the cedars: 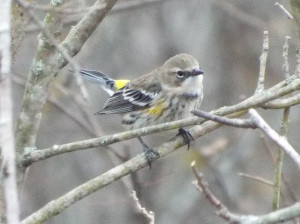 After this walk, I drove to Golden Chick and had roast chicken--breast and leg, a yeast roll and green beans.

Then I drove to the neighboring town of Farmersville. It has the Audie Murphy trailhead to the Chapparal rail trail, the first leg of a rail trail that extends over 100 miles, albeit with some interruptions from farmers who sadly block the trail.

I like to walk this concrete portion of the trail and watch for birds among the small trees and large bushes that line the sides of the trail. My favorite experience was when I heard a rustling and saw a little White-Throated Sparrow.
I got several pictures of this little bird. 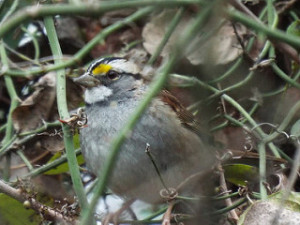 Once again robins predominated. This walk netted me a view of 12 species, while the Princeton walk yielded 13.

I looked around in downtown Farmersville. Sometimes the antique stores in that town are really interesting, with lots of affordable vintage this-or-thats. But yesterday things were more geared to furnishings, of less interest to me.

I did stop at the local post office to see the 1930s-era mural commissioned during the Great Depression to be painted by Dallas art figure Jerry Bywaters, one of the so-called "Texas Regionalists".
Here is a photo of that picture: 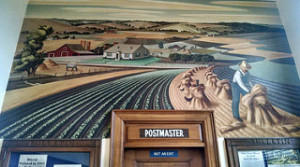 Though the cell phone photo is off-kilter, the painting itself is a meaningful romanticization of what the local area looks like--lots of fields interspersed with hints of riparian woods along the creeks. The area just north of Farmersville moves away from the flatness of central Texas and rolls a bit.

On my way home, I stopped by a store or two to buy things to fill a gift bag for Christmas for a child in Honduras. I found lots of great things on the little list, but am deciding whether I am finished with the first bag, designed for a 6 year-old girl.

We got tickets to the 7:30 p.m. showing of Fantastic Beasts and Where to Find Them at the Allen Cinemark. Then we ate delicious chicken pho and tofu Summer rolls at Forever Pho. We liked the movie very much, and watched the credits to sort out which actors played which parts.

Now we are home, another useful Saturday all but completed.
Collapse