Sunday I got up and ate my instant oatmeal in time to take a walk before my Weight Watchers meeting. I took a walk on the Chisholm Trail in Plano. The Lesser Scaup ducks were out in force in the creek. Also, some early December Fall leaves caught my eye.

At Weight Watchers I was up .4 pounds. The weekly guide they handed out had an intriguing recipe for a low-fat chicken tikka masala.

I went to church at First UMC of Allen. The sermon dealt with the magi in the Book of Matthew. I liked the nod to Longfellow's "I Heard the Bells on Christmas Day" with its theme of good triumphing over grim cannons. I picked up another plastic bag as I want to get more gifts for a Christmas for some kids in Honduras.

After church, I ate BBQ chicken, corn on the cob,a yeast roll, and green beans for lunch at Dickey's BBQ. My 11-year-old niece Quinn used my wife's cell phone to text and then call me, excited to tell me about a plan to visit my wife and I here in Texas in October 2017.

I had high hopes to get a lot of practical things done Sunday afternoon,but I found myself resting all afternoon. I did pick up some bananas and clementines at Kroger. I walked a bit in Green Park,but soon found it too chilly to endure long. It was a curious day--the temperature was not cold, but the moisture in the air was chilly.

I made myself instant Madras lentils and vegetable tikka masala for dinner.

My wife arrived home from the Kansas City area around 7:30 p.m. We enjoyed talking of her aunt's improved health, our nieces and nephews, and my step-mother-in-law's used car purchase saga.

This morning I ate Oatfit instant oatmeal. I got into work and had a productive day. At lunch, I walked in Breckinridge Park. I saw Goldeneye ducks, which I identified via the Cornell on-line site. But my closest sighting was of a pair of American Kestrels. 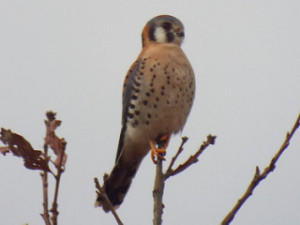 After my walk, I ate three soft chicken tacos from Taco Bueno.

My wife had a meeting tonight, so I stopped by CiCi's Pizza for dill pickles,
carrots, 2 slices of pepperoni buffet pizza and one slice of alfredo cheese buffet pizza.
Collapse