I spent much of Friday on long telephone conference calls on a family matter. I worked a bit into the evening digging up some interesting information on a work-related matter. I wrote a certificate of formation for a new non-profit I am among those forming. For breakfast, I ate two packages of Oatfit instant oatmeal. At lunch, I had a roasted chicken breast and wing, a yeast roll and green beans from Golden Chick. For dinner, I cut up asparagus, small "roaster" potatoes, and broccoli and microwaved it a huge glass bowl. I also ate a corn muffin and a skinny cow vanilla bean confection. I also microwaved some acorn squash, which was a bit less successful. Acorn squash seems to do better with a proper oven bake.

I spent much of the evening watching episodes of Star Trek, the original series. The shows are all very watchable, but the variability in their quality from season to season stands out a bit. The enormous debt that the show owes to the Twilight Zone also struck me last night. I fell asleep with episode after episode playing, but managed to return from 5 year voyages by turning the television off in the pre-dawn.

The forecast rain and colder weather arrived on schedule last night. I woke up to a light rain and a temperature a bit below 9 degrees Celsius. I ate my Kix cereal and skim milk. As I usually do, I slipped Beatrice little mini-milk bones as I breakfasted, balancing them on my knee area.

I resolved to get outdoors notwithstanding the inclement weather. When the rain calmed a bit, I wrapped up in layer upon layer and headed to Limestone Quarry Park in Frisco. I walked there for 80 minutes. When I began, it was barely raining but by the end it was raining quite steadily again.

During my walk, the bird life was pretty active, as it often is on this Taychas Trail sidewalk path in Winter. My favorite was the flutter of Chipping Sparrows, roughly ten in number, who flew into two small trees when I approached. 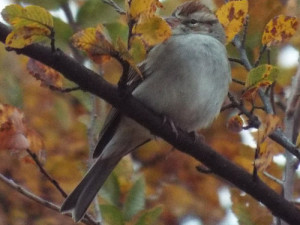 On my way to the park, I stopped at a Dollar Tree. I was hunting some one dollar gloves to wear in the rainy cold. I did not see any. But I did see lots of things perfect for another project. One of the couples in our church runs a home for kids who need medical care in Honduras called Send Hope. This year I picked up a plastic bag I am supposed to fill with small toys and other useful things to be gifted to a child. Say what one likes about dollar stores, they are perfect places to find fun little things small enough to fit into a plastic bag. I got
coloring books, colors, colored pens, a little drawing pad, a balsa airplane, a bouncing ball, and a little package of plastic horses, all aimed at a 6 year old or so. I must still buy from a non-dollar-store the practical things to add, but I was pleased with what I found.

After my time at the park, I stopped at Subway on Custer Road for a sandwich. The weather meant the usual Christmas crowds were absent. I had a veggie delight sandwich, with cucumbers, dill pickles, tomatoes, lettuce, cucumbers and sauer kraut, all on wheat bread, with my usual "a little salt on top". I also had baked chips.

I went home. I walked Beatrice when the rain abated a bit. A Cooper's Hawk stood atop a tree in the park. An American Crow began to mob the hawk, which proved only indifferently effective, 1 accipter hawk v. 1 crow being a fairly even match, with a nod going to the hawk for talon sharpness. When two more crows showed up,though,things changed. Soon the hawk sought out less crowsome climes.

I took our next door neighbor a router that UPS dropped off for her at our house.
I bought the Bill Nelson album "New Northern Dream" on bandcamp. I have been a listener to Bill Nelson since I was 17, some 40 years ago.

I spoke to my wife on the telephone. I was sorry to hear that her beloved aunt is very ill in ICU at the hospital. By chance, she was there, so she got a very brief visit in.

I stopped by Green Park, where I saw only 2 American Robins during a short walk, but accomplished my goal of exceeding 10,000 steps. I stopped by Kroger, where
I got Powerade Zero, three apples of varying provenance, a box of Corn Pops cereal (nee' Sugar Pops cereal), and some Kroger low-fat instant oatmeal.

I drove to get dinner at Holy Frijoles in Allen, the kind of little Tex/Mex place that sounded like just the ticket on a cold, rainy night. I ate two chicken enchiladas with verde sauce, a little salad and refried beans. I accidentally left my wallet in my car, so I had to go out and get it, a bit embarrassed to have to tell them "wait, my wallet is in my car". The restaurant was nice about it. At home, I ate one of the apples, a variety called Pacific Rose.

At 7 p.m., I went to First United Methodist Church of Allen to hear the Allen Symphony Chorus do its Christmas program. The first half was all John Rutter Christmas carols and hymns. I thought I knew the John Rutter Christmas songs,
but the only one very familiar to me was the organ solo "Toccato in 7". The chorus did a lovely job with these charming pieces. The second half was a sing-along carol time. I enjoyed singing along, except the part when I began to sing during the brief instrumental interlude. The concert lasted until 8:50 p.m., whereupon I came home, told my dog Beatrice I loved her, and sat down to type this entry.
Collapse