Saturday I woke reasonably early and ate Cheerios multi-grain cereal and skim milk. I took Beatrice for a walk.  the early morning weather proved windy with a touch of chill--right on target for this time of November. Beatrice patiently said hello to an over-eager male Poodle we had never seen before. She had a more friendly hello for her friend Diva, a winning Shih Tzu with nice owners. I am not sure if Beatrice's friendship with Diva is based upon sympathy of soul or based upon Diva's owners being willing to pet Beatrice, but it all works out.

The time change had the unwelcome effect of cutting down on the number of steps I take on the weekdays. So i resolved to walk a lot on Saturday.  I drove to Towne Lake Park in McKinney.  I walked there for a bit over an hour.  I saw lots of birds, particularly in the woods next to the Community Center next door. Some kind of construction was underway at the Community Center--it looked like a new addition.

I picked up a Black Forest Ham sandwich and baked chips at Subway. Then I drove to Allen Station Park. I walked there for another hour or so. Then I drove to Sprouts and picked up bananas. I stopped for one last walk in Green Park, where I admired a Common Buckeye Butterfly who stayed still.

Late Saturday afternoon, i tinkered with attaching another desktop to my television. That effort proved less successful. When my wife came home from  getting a facial, we headed to the movies.

Very near our home the Moviehouse and Eatery opened, part of a recent trend for cinemas to serve meals. We bought tickets to the 5:45 p.m. showing of Dr. Strange. We were impressed with the menu. I got a vegetable burger based on sweet-potato-admixed patties called a Sandy. My wife got a kind of beef rice bowl. We both enjoyed our meals.

We also liked the film. I had not been in any particular mood for one more comic book hero movie. But Tilda Swinton and Benedict Cumberbatch did a good job with a good script, which made the film a good watch. We headed home. We watched a portion of a sports contest involving my alma mater, until its team gave up prior to the end of the game. Then we watched an "Inspector Lynley" mystery and "Ashes to Ashes" on PBS.

Today I hope to do a few practical things.

Sunday mornings follow a pattern for me. I get up early, and make myself cold cereal or oatmeal. Today I made instant microwave oatmeal. After breakfast, I did some shopping on eBay, but did not buy yet. By 8something, I was walking in Plano on the Chisholm Trail, The section I chose of this sidewalk path is the part that I reach via an elementary school parking lot on Rainier.

This part of the Chisholm Trail runs by a place in which Rowlett Creek, one of the multiple tributaries of Dallas' delta-like Trinity River, This particular section is directed into a little lake-like spur, rather like some of the urban "waters" I saw in Scotland. 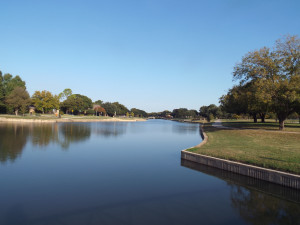 In the Winter, this creek will be full of Wintering ducks of multiple species. But today, I saw only a group of mallards in a shallow section.

During this walk, I saw Eastern Bluebirds, Chipping Sparrows, and a House Finch.
After my Sunday morning walk, I head over to the 9:30 a.m. meeting at the Weight Watchers location at Custer and Parker Roads in Plano.  This time I elected to stand during the meeting, to burn a calorie or two.  The little weekly handout include a recipe for pumpkin tarts in wonton wrappers.

Roughly 25-30 people attend this meeting each week. I have been going to the morning meeting on Sundays over a year, after declining membership caused the organization to "close" the 2 p.m. Sunday meeting. I rarely speak at the meetings, which leads the leader to think I am the quiet type. I am not really the quiet type. I am a situational socializer. 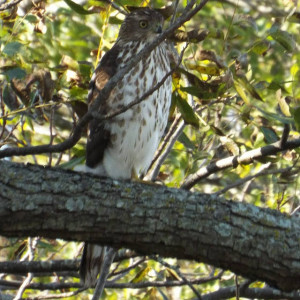 I went to "The Way" service at First UMC of Allen. The sermon dealt with personal sacrifice to achieve good.

After church, I ate lunch at Dickey's BBQ, where I ate breast of chicken, two helpings of green beans, and half a dinner roll. After lunch, I went to Great Clips in Plano for a haircut. At first, I had to wait since others signed in ahead of me using an on-line portal. One woman ahead of me got a Marine-style flat-top.  A mom waiting for her son sang softly along to the Smiths' "How Soon is Now?".
Finally I got a haircut, done by two. When I stopped to buy bananas next door, I noticed a couple of grown men wearing Dallas Cowboys jerseys. The succeses of the local sports team appear to be inspiring loyalty.

In the afternoon, I watched the Dallas Cowboys game in television. At half-time, I picked us up chicken, charro beans, broccoli and corn tortillas from El Pollo Loco.

We watched the Dallas Cowboys win a very close game against a very good team. Then we settled in to watch Sunday night dramas.

My wife pointed out to me that our mlikweed plants are improbably filled with November Monarch caterpillars,
Collapse