I got up yesterday and ate some Kix cereal with skim mlik. I drove through the rain to my office. At lunch, I walked by Rowlett Creek off Renner Road in Garland. I also stopped by Breckinridge Park. From my car, I saw lots of birds enjoying the puddles on the soccer fields. One, an American Woodcock, was the first sighting I can recall. 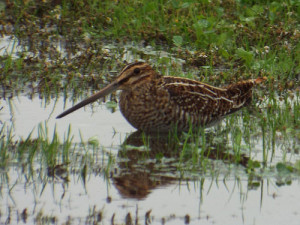 I ate lunch at Panda Express, where I had string bean chicken, broccoli beef and mixed vegetables.

After work, I stopped by the Sprouts Market near my home for bananas. We dined on oven-roasted chicken, half a sweet potato,
and squash.

Then I settled in to watch the election results. After the resutls in Florida showed a surge in rural voting for Donald J. Trump which was not offset by urban turnout for Hillary R. Clinton, I knew the night was not going to go well for Secretary Clinton. I watched television for a while for confirmation. i downloaded an old movie starring William Powell from Archive.org, after a dollar DVD of the movie proved defective.  But I ended up going to bed instead of watching the film. I found myself eating a bit more last night than usual--a reminder that I still eat under stress. But I stayed within the allotted "smart points" of my eating program. So I overeat healthier things, I suppose.

My Facebook feed ranges from exultant pro-Trump posts to expressions of heartfelt concern about Mr. Trump's election to hostile posts from Clinton supporters assailing folks on the left who did not support Secretary Clinton. My own reaction is disappointment that the truism that it is hard to elect the party in power to a third presidential term applies even in this odd election with this odd  Republican candidate.  I foresee a turbulent four years ahead, after eight years of government with a president I liked. I felt Mr Obama governed with a steady and in the main judicious hand. I am concerned that things will worsen now.

It's cloudy today but less rainy. I like the wet and cooler weather.

My first thought when I woke up was that the election really happened and came out the wrong way.  I ate Kix cereal for breakfast, and then headed into work. At lunch, I walked to Potbelly for a TKY sandwich and baked chips. For dinner we had French Dip sandwiches.

My two law partners and I discussed our surprise at the election result. A college student from Spain wrote me to ask my permission to use my songs in a university video project. I wrote back with how to give the credits.

A volunteer from eBird wrote me to advise me that my American Woodcock was really a Wilson's Snipe. I knew it was down to those two choices, but apparently I got it wrong. But it was a cool snipe.
Collapse