I originally thought about getting up early to try to spot an eagle and to hear a talk on woodpeckers at Hagerman National Wildlife Reserve. Alternatively, I thought I might get up and head to the 8 a.m. bird walk at the by Heard Natural Science Center, where expert leaders help me spot a wide variety of birds.

In the actual event, I slept in a bit. I suppose I can say "a bit", because Beatrice expressed a heartfelt belief that we should wake hours before I was ready to wake. My viewpoint on this topic prevailed, but only after a bit of polite but firm vocal exchange.

So I woke nearer to 9 than to the 6 or 7 I would have been required to meet to go bird-walking. Instead, I got up and got a shower and made microwave oatmeal. Then I put on my light rain jacket and took Beatrice for a walk. The morning was warm but overcast and sprinkly. We enjoyed the walk.

I decided that today would be a good day to walk in Celebration Park here in Allen. This is one of those open-field parks largely devoted to soccer fields. I thought I might see the first of the Summer prairie birds. In the event, I saw more Ring-Billed Gulls than anything else, but it was good exercise.

I decided to stop by Bethany Lakes Park. I took pictures of two park regulars--the House Sparrow and the Yellow-Rumped Warbler. 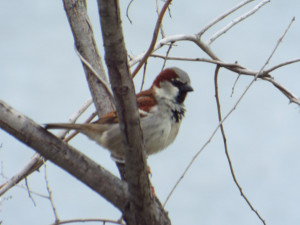 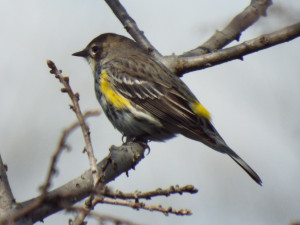 Bethany Lakes Park lives up to its name by featuring three bodies of water one might call large ponds or small lakes. Behind one pond a trail goes through a stand of trees. I often go there to take pictures of Yellow-Rumped Warblers in the trees overhanging the lake, or of sparrows a bit more "inland". Today, though, I saw something I have never seen before: 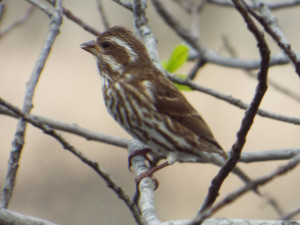 Back at my car, I worked out that this was probably a female Purple Finch. I had never seen one before. It is common in other places, but an unusual sighting here. Later, I confirmed my ID at the What Bird? facebook page.

I stopped by Denny's for lunch, which capably served me with a double shot of egg whites, a grilled ham slice, and a fruit cup. Then I drove to Petsmart, where I got Beatrice's special dog food. Just outside the check-out line, I picked up a small stuffed duckling. Along the way, I saw my first Greater Roadrunner crossing the road at a running pace.

Then I headed home. I sat down and watched the last forty-five minutes or so of the World War Two movie "The Longest Day". I always find this movie interesting, not least because is poses the "just war" conundrum in stark terms. I also threw Beatrice's new duckling,which was a quacking success.

I drove to Classic Cuts in Plano, where a helpful haircut professional helpfully professionally cut my hair. At one point, she lifted the hair on top of my head into a point, smiled, and said "Mohawk". We had a good chuckle. She did a good job. The tab was fourteen dollars, so I gave her twenty. I like chain haircut places because one can tip there and still not owe much for a haircut.

I had only 9,000 steps on my step counter, when I wanted more than 10,000. So I drove to Limestone Quarry Park in Frisco and walked again. My wife called me to advise that her folks asked her to stay another day. I also listened Radio New Zealand as we walked. I had earlier listened to that station at Bethany Lakes Park, where a reader read a story about a little girl who got a satisfying yet non-malicious revenge store-keeper who had stolen from her a nugget of gold. There had also been a short story about a Kiwi boy who meets Katherine Mansfield's ghost. I learned that Ms. Mansfield only lived to be 34. During my walk in Frisco, artists talked about a center for Pacific Islander artists.

I drove home and tried to help my wife resolve a glitch in the reservation change.
The system showed that it cost nothing to upgrade, but then refused to put through the upgrade for want of enough funds being spent. We had to leave it for her to make a phone call.

I checked my Purple Finch identification and got confirmation. I uploaded some of my photos to Flickr.

I went to get dinner. I ended up at KFC. Our local KFC always seems a bit disorganized to me. The folks who work there are pleasant but ineffectual. This time there was a delay and they ran out of biscuits at 7:30 p.m. So it is always the way there. The issue was finally remedied.

This evening I started to make some music, but did not get exactly what I wanted. So now I am typing this as "Monty Python and the Holy Grail" plays.
Collapse