I arrived at Car Care Central in Plano at 8:30 a.m. I had an appointment to get my rear shocks checked, after the tire place near my work identified the issue during a routine oil change and inspection. Though the fellow at Care Care Central had expressed his concern that the tire place had merely been up-selling, the shop fellow soon pointed out to me the leaking shock. By this time it was five minutes to nine a.m. They advised me that it would be 2 to 3 hours to get the new rear shocks installed. I understood this would be x time to order the part and y time to install it, though this went unspoken. They offered to drive me home rather than waiting. But I said that I would walk to the park.

I knew that the Bluebonnet Trail had a trailhead just south of Car Care Central. So I went for a walk for the next 100 minutes. The Bluebonnet Trail is not a wild park, but instead a sidewalk trail through a power line area in a suburb. But its gently rolling hill, its small creeks and the trees in the parks along the trails can prove surprisingly filled with birdlife interest.

I liked the Eastern Phoebe and the Red-Tailed Hawk I saw during my walk. 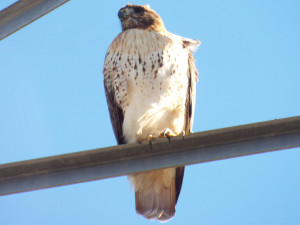 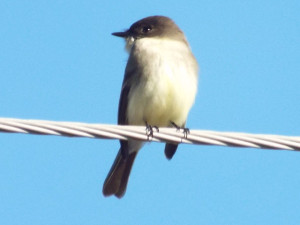 I went back to the car repair place and uploaded my pictures to Flickr on my laptop. Within a half an hour, my car was ready.

I went to lunch at Taco Bell, where three soft chicken tacos worked very well for me. Then I began three hours of shopping for Christmas gifts. In the late afternoon, I drove home and took Beatrice for a walk--she loved that. I took pictures of a flock of Cedar Waxwings during the walk. 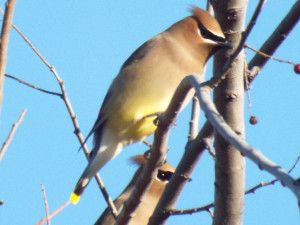 Then I got on my laptop and began the internet order part of my shopping. I finished roughly 85% of my shopping. I messaged a niece and texted my brother.
At day's end, I headed to Allen Station Park. This park features Allen's one historical wonder. Paris has the Eiffel Tower. London has Big Ben. Allen has the 19th Century railroad dam. I was delighted to find that the short nature trail has finally been expanded to join up with the Cottonwood Creek Trail. This makes it possible for me to ride my bicycle from my home to the Allen Public Library while riding 90% of the time on
bicycle trails without car traffic. I walked partway down the new trail.

We dined tonight at Rockfish Grill, where my grilled catfish was good but my wife's grilled Mahi Mahi was probably better.

Tonight we decorated our little "kitchen tree",an artificial Christmas tree for which we have a particular set of charming ornaments. The tree looks great! I love the holiday season.
Collapse