On my way to my morning Weight Watchers meeting, I walked on the Chisholm Trail in Plano. I liked the small flock of American Goldfinches. 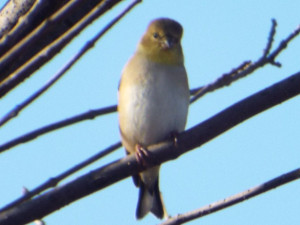 At Weight Watchers the leader rolled out the new "Smart Points" program. This amounted to a routine recalibration of the various point values assigned to the foods. The company's on-line presence has had a few more than the predictable hiccups. The app only works intermittently, apparently the victim of inadequate server support, while the website now works after days of spotty performance. In general, the new web presence is more attractive and somewhat less easy to use--which makes it like every other re-design I have experienced lately [last.fm comes to mind]. As she sometimes does, Bernice, the leader, teased me for sitting on the back row in the corner. I am a mix of introvert and extrovert, but I take a little pride in not worrying too much when someone seeks to publicly note my less gregarious moments.

After Weight Watchers, I went to church at Suncreek UMC. To my delight, today was occupied by a children's pageant. The mix of kids presenting the Christmas stories from the gospels of Matthew and Luke and the Christmas carols in between was great fun.

I went home and gave Beatrice a walk. She enjoyed it very much---in particular, the part in which she got to bark at a passing hound, who was barking at her.

I went to lunch at Taco Bell. Soft chicken tacos remain within reason,Weight Watchers point speaking. Then I went to Limestone Quarry Park in Frisco. I walked for a bit more than 2 hours, from Limestone Quarry Park to Harold Bacchus Park and back again, on the Taychas sidewalk Trail. I got good pictures of a Loggerhead Shrike and a Northern Mockingbird. A nice man with two dogs told me about the neighborhood Great Horned Owl. I saw no owl, but only a Cooper's Hawk.

I bought bananas and cereal. Because the bananas are too unripe, I tried to eat a raw plaintain. I do not recommend this food choice. I did have some good oranges.

We made plans to spend Christmas with family.