Friday in Kansas City the temperature fell and light freezing rain fell. We dined at Bella Napoli in Brookside with our niece, a freshman in college. Then our niece went with us to my wife's father's house. We went to see my wife's Aunt at the end of the day. The visit was mostly pleasantries, but had a dessert of mild fireworks. We had a nice Friday night at my wife's father's house. I made progress on the science fiction novel that I am reading.

Saturday we got up early to catch our flight. The bridges on the way to the airport were protected by police cars, who funneled traffic to one lane per bridge and kept speeds in check.

North Texas got huge amounts of rain, bringing the rainfall total for the year to a new recorded annual record,with one month remaining. In mid-afternoon, the rain stopped, so that I could take a walk at Bethany Lakes Park and another walk at Limestone Quarry Park. I bundled up in layer upon layer.

I also got a haircut at the chain place on Hedgecoxe. They keep my haircut preferences in their computer. The woman who cut my hair did a great job.

We dined last night at Pho is for Lovers. Pho is a grand thing on a cold night.

I woke up just in time to make it to Weight Watchers by its 9:30 a.m. start. I found that I had lost 2 pounds during the holiday. I was pleased about that, particularly given I ate cherry pie, lingonberry cheesecake and Swedish peperkokar cookies during the weekend.

I drove in the rain from city park to city park, on a kind of auto-propelled birding tour. I did walk at Russell Creek Park, with my hood on in a mildly driving rain. But the rest of the time I watched sparrows and meadowlarks from my car.

I installed the Mate desktop on my Q4OS linux computer. I like it, but not as well as LXDE or Trinity.

In the middle of the afternoon, a brief let-up in the rain gave Beatrice an opportunity to take a walk. I put a warm green jacket on her. She had a good time.
I saw a juvenile Red-Tailed Hawk in Glendover Park as we walked. 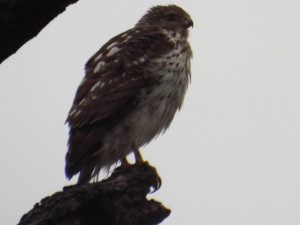