Monday morning I had a ten a.m. meeting in Austin. I woke at 3:50 a.m. I showered and donned my suit. I arrived at the airport at 5:15 a.m. We boarded the plane at I
I woke at 3:50 a.m. Monday. I showered, put on a suit, and got to the airport for my scheduled departure at 6:15 a.m. During the drive to the airport, a radio talking head pretended that conservative opinion think tank the Heritage Foundation was a neutral investigative body.

I got to the airport before 5:20 a.m. At 6:35 a.m., the pilot told the loaded plane that fog in Austin, coupled with flood damage to the Austin airport electronic equipment, caused the airline to cancel our flight.

I ran to my car. I drove to Austin. I made it to my meeting at five minutes before ten. All my meetings went well. I drove back in the afternoon. When I stopped by a store on the way up, the young woman who helped me complimented my suit. I am rarely immune to a kind word. I ate soft chicken tacos for lunch.

I arrived back at my office in time for my five p.m. call. I fell asleep before nine a.m. I woke up today. Beatrice and I took a walk. We said "hi" to Jeannette the crossing guard. The weather was overcast but not quite rainy. The woman behind the counter noted that I ordered a small fries rather than my usual side of corn. In little Salmon Park, a flock of Red-Winged Blackbirds hid out. 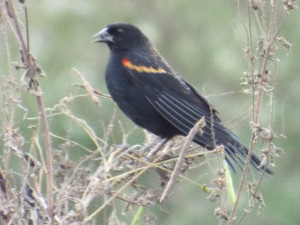 I meant to vote tonight, though only one of the seven initiatives interested me much, and I would have voted "no" on only two. But I forgot to go vote and got bananas and salmon instead.
Collapse