Friday evening we ate hot dogs and watched the World Series on television. The rain fell all night, but stopped by early morning. Saturday morning I walked Beatrice on a pleasant overcast walk. She enjoyed watching a squirrel race up a tree at her approach. I enjoyed seeing a Gadwall Duck, with its milk-chocolate feathers.

I made a computer wallpaper out of this picture of the park this morning: 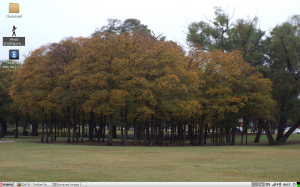 Saturday late morning and early afternoon I got some bills paid and deposits made. This type of thing seems like it should be instantaneous but somehow turns out to be time-consuming. I made a run to the mail center at 2:30 p.m. Then I went to Dickey's BBQ for a chicken breast plate--chicken, two doses of green beans, dill pickle sticks, a roll, and a sauce mixture I hand-make of equal parts the hot sauce, the sweet sauce, and the regular sauce.

I drove to nearby Limestone Quarry Park in Frisco. This park features sidewalks through a bit of riparian woods. I saw a huge Cooper's Hawk on a bare, dead tree branch, its red eye in keeping with Halloween. The overcast, misty afternoon weather this time of year often yields Winter sparrows, but not today. But I did see Ruby-Crowned Kinglets, freshly arrived from Canada, Tufted Titmice, Carolina Wrens, Carolina Chickadees, a Red-Bellied Woodpecker, and a world of Blue Jays.

A couple around my age came by with their dogs. One, a fluffy white number, was attired in a tutu. The other, a more sturdy small dog, was dressed as a pumpkin.
On paper, I oppose Halloween attire on dogs. But they were charming.

As I walked, I listened to a football contest involving my alma mater's team on internet radio. I like to listen to sports or podcasts when hiking. Though the headphones arguably limit hearing wildlife, it's soothing to have a voice speaking in one's ear when one is watching cool things from nature. I thought how the post-rain, overcast 18 degrees C. weather was classic Halloween in Texas or Summer in British Columbia.

Tonight we had a very low trick or treater turn-out--just 15 kids, perhaps a record low. This is partly the weather, and partly that our neigborhood kids are aging out.
At 8:45 p.m. we called it a night and went to Pollo Tropical for grilled chicken.
Collapse