Sunday morning I got up early and drove to Brockdale Park, near Lake Lavon. As is often the case in Autumn and Winter, the Eastern Bluebirds were much in evidence just after sunrise. I enjoyed taking pictures of bluebirds who faced the new dawn. 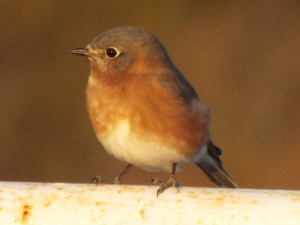 I took Beatrice for her morning walk. We saw an immature Cooper's Hawk on a fence near us. The immature hawk sports bright red eyes. My camera chose to focus on the tree behind the hawk rather than the hawk.

I went to my Weight Watchers meeting. The switch to a 9:30 a.m. morning meeting has been good for me. I get Beatrice walked, the meeting done, church attended and perhaps some extra exercise in before 1 p.m. The meeting leader is a charismatic former schoolteacher named Bernice. I always feel a bit like the successful introvert who always says the wrong thing in class, but that is not an altogether alien feeling for me and thus is not discomfiting.

I took a shower at home then went to church at Suncreek United Methodist Church. This is the methodist church nearest my home, and qualifies as my "where I got when I leave the house only five minutes before services begin". I like the services there. This particular Sunday a youth choir sang a very capable Da Pacem Domine, after which thte congregation said goodbye to the volunteer choirmaster. She went out with a harmonized, quiet bang, and shouldn't we all?

I went to Market Street for lunch. Market Street is owned by one of those chain supermarkets which opens modestly upscale markets with a few less usual selections. I got a slice of cheese pizza and a fruit cup, and went into the nice dining area they have.

After I finished my pizza, and before I ate my half-pint of fruit, one of the workers began asking me about my meal. I told him it was good. He then launched into a long narrative that began with his work as a part-time stand-up comedian during his college days at the University of Southern California. This story capped off with the story of how he met Barbra Streisand after a show.

His story then veered into the loss of his wife three years ago, and his use of social media dating services. The next thing I knew, I was hearing about his dating experience with a woman of what he considered to be snobby disposition. This segued into what I at first took to be a discussion of how he met his second wife,but soon turned out to address the challenges he experienced when the woman he was dating experienced an episode in which her medications failed to provide her the protections he felt optimal. In the midst of this story there was an encounter,mostly benign,with the police, and a discussion of his incipient conversion from Judaism to Christianity.

My fruit and I listened patiently.

Finally, the story wound up with a discussion of his own "manic depressive" disorder, which he assured me had been successfully medicated from childhood. I adjourned to go to the park, listen to the Ubuntu UK podcast, and look in the little bit of shady woods at the American Robins and a Carolina Wren.

Monday I worked a solid day, and then fell asleep watching a 9 p.m. drama on television. I also watched some sports, at first rooting for one team on Monday Night football, until I realized it would be better for my home town team if the other team won. I also followed the Canadian election on my cell phone. My wife watched her favorite team, the Kansas City Royals, lose a baseball game. I went to sleep, but she stayed up late watching an interview with a politician

At 1 p.m., I got off a two-hour business call to find that my twitter and my email had been hacked in my absence, leading to some spam emails leaving my email account. I quickly re-did passwords for both the affected email and social media and unaffected social media. I got it changed in short order, but it was an un-needed distraction. I was glad I caught on relatively quickly,but irritated by the hack.

Now I need to work out another password scheme, as the password conventions I just adopted are not to my liking. I hope nobody clicks on the malware links the robot sent out.
Collapse