The October mornings start at 14 C. or so and end in the mid to high 20s. Yesterday I stopped by Shawnee Park on my way home. This is the time of year when Eastern Phoebes are very much in evidence. Eastern Phoebes, small dark flycatchers, are among our few year-round flycatchers. But in Autumn those who Summer to the north and those who live here congregate together. The young ones bear yellow on their breast.

We dined on fish at Bonefish Grill last night. We watched the local sports baseball team fail to clinch a division championship, though just last night it had clinched a wild-card playoff position. A similar lack of success today means tomorrow it will have a challenge. But for us it is a passing interest.

This morning I headed to Brockdale Park on Lake Lavon after walking Beatrice. The park met my expectations. It was filled blooming Maximillian Sunflowers, sporadic migrating Monarch Butterflies, less migratory but seasonal Gulf Fritillaries, and what I believe were Soldier Butterflies. 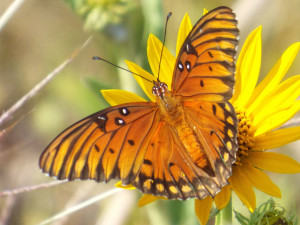 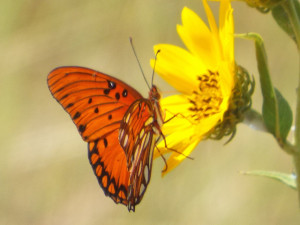 I also saw some sandpipers, but they flew away before I could identify them. I also stopped by Bethany Lakes Park here in Allen,where I saw checkerspot and Monarch butterflies. and I lunched on buffet pizza, carrots and dill pickles.

I went to PetSmart to get Beatrice her special dry dog food and some pill pockets.
A mother and daughter had a new puppy named Belle.

At the end of the afternoon, I wanted to enjoy the weather further. I hopped on my bicycle and rode to DaySpring Nature Preserve, a 17-minute ride from our home. There I saw a Northern Mockingbird in a small tree. 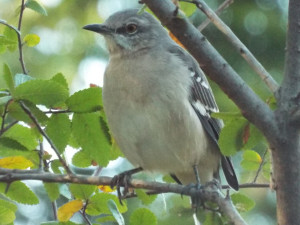 My eBay seller got me my waylaid item, and promised to reimburse my postage for the
wrong item inadvertently sent which required return. I was glad it all worked out so well.

On one tree I saw an assortment of butterflies on a single tree trunk. They took in the end of the afternoon sun. I saw Red Admirals, Hackberry Emperors, a Question Mark butterfly, and an Eastern Comma butterfly. 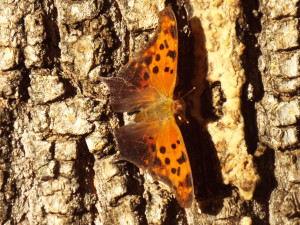 I dined on pho ga', while my wife had a banh mi.

Yesterday I resigned two of my postal chess games, after falling into a losing combination in a difficult position in one, and watching my collision collapse after needlessly losing a pawn in another. I am down to just two tournament games--I have a widening but not yet decisive advantage in one, and am losing the other.
Collapse