Saturday morning I walked Beatrice under cloudy skies. Then I drove to Carrollton, about a half an hour away. On my way, I stopped by a little trail called the Green Trail. There I walked among Scissor-tailed Flycatchers and doves.

I completed my journey to the Dallas Makerspace. The North Texas Linux Users Group meeting took place there. This was my first time to attend a LUG meeting. The folks there were pleasant, though I found myself overall pretty quiet. One fellow showed how he had lots of entertainment on a single server so that he and his family could access everything from a plethora of devices and places. The speaker gave a good talk about privacy keys.

After the meeting, a fellow gave me a tour of the Makerspace. It was pretty amazing.
There were areas for almost every kind of machining, woodwork, laser, artistic and electronic craft one could imagine,from mask-making to 3-D lasers to automotives.
The space offers most of its classes for free or for a low tariff. An annual membership was pretty darn reasonable. I thanked the fellow for the tour, and felt a bit enriched by the new knowledge.

Soft chicken tacos served nobly as my lunch. On my way home, I went to Arbor Hills Nature Preserve in Plano. A morning rain had suppressed the visitor stream. I was able to enjoy the trails without crowds. We don't have much in the way of hills in Collin County but I could get a good view from the tower. I saw a little yellow warbler fly fleetingly by, a migrating bird in a hurray. I think it was the amazing Prothonotary Warbler. I did not "list" it, though, on my list for the day, as my view was too fleeting. I also saw lots of Northern Mockingbirds, Mourning Dove, White-Winged Doves and some Blue Jays. I was glad to see so many doves, as it is dove hunting season and I am glad they are in a safe place.

I took lots of pictures of a Gulf Fritillary butterfly. It was lovely, though its
wings were tattered and it was missing an antenna.

In the evening, we drove to downtown Dallas to see the Twyla Tharp Company perform
two new works as the debut engagement in a fiftieth anniversary tour. We had great seats on the 4th row in the center section of the ground (orchestra) floor. The dance company proved to be amazing. Two interesting fanfares by John Zorn served as aperitifs for the dances to come. The first main dance used Bach pieces from "The Well-Tempered Clavier". The dance involved a lot of duos, sets of duos, trios and other group pairings of dancers doing varied but ordered movement. The second main dance featured Jelly Roll Morton and Henry Butler songs and featured a more dramatic presentation of dancers in colorful outfits doing quick, athletic and more chaotic vignettes of excess. We enjoyed the evening very much.

I saw that one row in front of us was a fellow who leads some bird walks I sporadically attend. I said "hi", and it took him a moment to sort out who I was, given the context. After the show, he said "a lot different from birding" but I told him that I thought both involved looking at things one does not always understand but that I very much enjoy.

After the dance, Ms. Tharp came out, down-to-earth in jeans and sneakers, and took audience questions from six rows or so of folks who stayed to ask. She was direct and informative. The audience vibe for the dance, not surprisingly, included lots of folks of all ages with lithe former dancer figures and mildly bohemian looks. Some of them proved to be the most fervent questioners. Ms. Tharp gave a generous and patient set of interesting answers. It was great that she gave her time in that way. It added some perspective.

The Plano Balloon Festival is this weekend. We are not going to go, but in our neighborhood, the morning walk is a festival nonetheless. 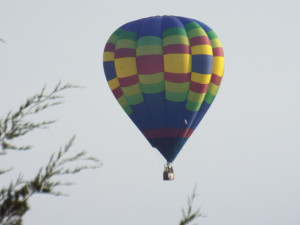 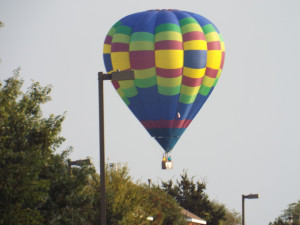 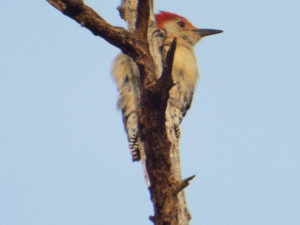