A cool Saturday morning found me on the road to Hagerman National Wildlife Reserve just south of the Oklahoma border. I went on the 8 a.m. bird walk. One of the other walkers commented that it was the worst bird walk on which she had ever been. I would not say that--the guide was great, we saw lots of wildflowers (which Master Gardeners in our group could identify), we saw a huge water mocassin snake, and we saw several of the species known as the Solitary Sandpiper, which I had not seen so far that year. But overall, we saw fewer birds than I would have seen had I birded within cycling distance of my home.

At 10 a.m., Hagerman hosted as an award ceremony for its photo contest. The photos were great. Then Jim Varney gave a good speech on wildflowers at Hagerman. It was a nice refresher on college biology (vascular and non-vascular and brachts and all that) coupled with lots of photos and anecdotes of plants. I learned a lot.

The outdoor portion of this lecture took place in the Butterfly Garden. The new Hagerman butterfly garden is grand. It's not one of those "tropicals under grass" but merely a "let's plant natives and attract the locals". I loved seeing the Blue Mist plants swarmed with Queen butterflies. 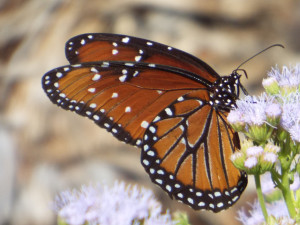 Perhaps I should be abashed that the pictures the group posted on its Facebook page show lots of people listening to Mr. Varney, and me in the background with my zoom camera.

The reserve took heavy damage in the May/June flooding. One main road is closed. Trees who suffered two years of extreme drought flooded out. I drove by the wetlands and watched the White-Faced Ibis flock and the Snowy Egrets. I noticed that one Snowy Egret was missing a claw, but it somehow was making a go of things anyway, looking well-fed and able to get about.

Saturday night we ate Mexican food at San Miguel and made an early evening of things. 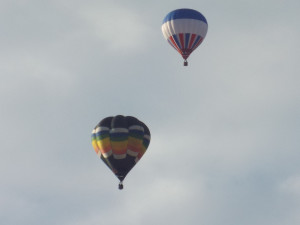 When we got to Glendover Park, I noticed some Blue Jays on a branch, issuing warnings. 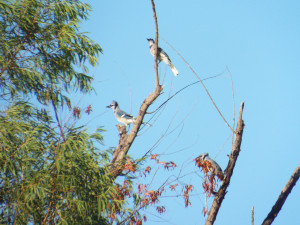 Then they flew away. The thing they were warning against, a Cooper's Hawk, took over the limb: 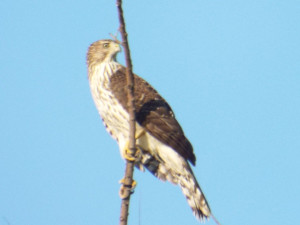 Soon it flew away, apparently on the prowl.

I went to Weight Watchers, where I lost a little weight. I calculated that my BMI
is now 26.1. I am happy with that ratio, though I also believe that BMI is not a very definitive stat.

I went to church tt Living Life UMC. The minister said he would write me an email so that we could do lunch.

After church, I had a slice of cheese pizza for lunch at Market Street. Then I walked in Bethany Lakes Park, where I saw red-eared slider turtles and a mallard duck with a late-ish set of ducklings. 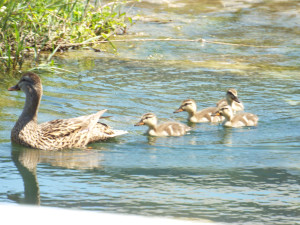 In the afternoon, I got my haircut at a franchise place. I liked to have it short.
I watched the local team eke out a narrow win in a sports contest on TV tonight.
Then I thought about grapes.
Collapse