After I walked Beatrice, I drove 45 minutes south to the Trinity River Audubon Center.
I walked the trails there for an hour and a half. Late August is more quiet for birders here, but I saw two Little Grey Herons, two Snowy Egrets, and a Great Crested Flycatcher among other common birds. I loved seeing the Trumpetvine and the Maximilian Sunflower.

I spent the early afternoon getting my oil changed. Then I ate roasted chicken for lunch. This evening my wife and I headed to the nearby McKinney Performing Arts Center. We were destined for

We saw the Light Crust Doughboys, the venerable band which first pioneered Western Swing in 1931 as the house band for a bread and flour company. The concert was great. They used films to explain the history of the band. I was interested to hear that unlike some other bands of the early radio era, the band did not start as a dance band who got a sponsored deal,but instead started as a corporate band who never really played dances. Their boss at the company, Pappy O'Daniel, ultimately fired Bob Wills, whose Texas Playboys brought Western Swing into more prominence. When the company fired O'Daniel, he started his own flour company, his own swing band, his own radio show, and ultimately became a popular Texas governor and United States Senator.

The band did a great job. One was a 5th generation descendant of Bob Wills, One was Charley Pride's son Dion. The band's two fiddle players included one symphony violinist and one Grammy winning fiddler. Local artist Krysten Harris, who has won some awards at the tender age of 21, accompanied the band, as well as four backing vocalists. 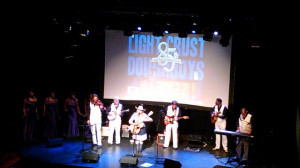 The show was fun. The band played a lot of Light Crust Doughboys standards, a lot of western standards, and a few fun things, like a version of "Lord of the Dance" featuring their Polish immigrant fiddler doing Irish instrumental gospel music with a Dvorak influence.

The background singers got to come up and sing solos, and each player go ample room to perform. The effort was to have a fun, broad appeal without too much compromise. Thus, we got Kris Krisofferson's "Why Me", "Somewhere over the Rainbow", Dolly Parton's "I will Always Love You" (done less bombastically than the Whitney Houston version), Michael Martin Murphy's "Wildfire", and a jaunty bit of Czech-influenced classical violin. Of course we also got "Ghost Riders in the Sky", "Cool, Clear Water" and the various Doughboys songs like "Beautiful Texas" and the band's idiosyncratic theme song. The music last some two+ hours, and was a great listen.