As we waited for the bus, the man at the newstand commiserated with me that the ticket office did not open until after the bus departed, and no machine permitted advance ticket purchase. He gave me a long detail on his opinion of the regional council, of which I understood roughly one in every three words.

The bus driver helped us out. We rode the bus for half an hour to reach the ferry for Inchmahome, an island in the Lake of Menteith, in Stirlingshire. The boat ride took merely ten minutes. We walked around the island in about an hour. A bird I recognized from the books called a Pied Wagtail danced on the ruins of the priory.

Hundreds of years ago, Mary, Queen of Scots, took refuge there for a few weeks when she was five years old. Its name means Island of Peace, and it is a serene enough place. As is often the case, I was struck by the distinctions between laity and non-laity, and the pecking orders inherent in the life of humility. A trip to Scotland is a crash course history lesson in the folly of religious wars and the folly of irrational totalitarian power.

We dined at a charming lakeside cafe, where the Ayrshire Pork Tacos did not resemble tacos so much as a kind of pleasant pork-and-corn-chip salad. which was just fine with me.

As we waited for the bus to return, on a country road with sheep nearby, two
Goldfinch landed on an empty community centre building. 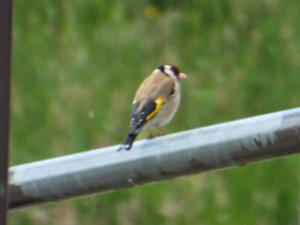 This, rather than long-ago-departed monastic orders, made me feel connected to something greater.
Collapse