My wife and I woke up early. The news was full of a fellow who shot the Dallas police headquarters and his ultimate demise thereafter. We took Beatrice for a walk in the cool morning light. Bea did not notice all of the rabbits my wife and I saw. I went for a walk in Brockdale Park. This is a little lakeside park which is a good place to bird but little more than lake access, a parking lot, and some trees beside a road. I did not see much, given rainy weather. Then I heard two women calling me from a woodland. They were animal rescue volunteers for the Blackland Prairie Raptor Center, which takes care of raptors who cannot fend for themselves, either through injury or through human imprinting at birth.

They were giving an outing to two raptors, an American Kestrel and a Barred Owl. They let me take a picture of each. This is Beaker, the Barred Owl: 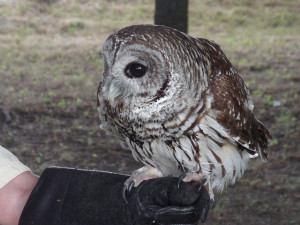 Though my bird list was thin on this trip, featuring mostly Northern Rough-Winged Swallows,
the raptors brought me good fortune. Soon I was watching a little Eastern Phoebe, a flycatcher,hunt in the low weeds in a nearly field. Here's an idea of what it looked like:

Then I went to Farmersville, to South Lake Park. I hoped to see a Painted Bunting there, but the weeds were a bit tall where I walk to do so. I did see a lovely Lark Sparrow, though and this Northern Cardinal: 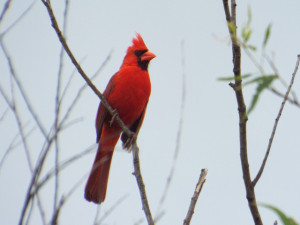 Here is the Lark Sparrow: 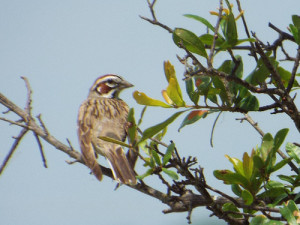 I wanted to bird in downtown Farmersville, on the Chapparal Trail, but rain intervened.I contented myself with soft tacos from Casa Taco.

My wife went to dinner with a woman from work tonight, while I stayed home and did a remix for the latest ccMixter Secret Mixter matter. I was fortunate to have good, offbeat samples with which to work. I ended up drafting a somewhat keyboard-prone song.

I ate a sandwich at Subway, got buzzed, a bit, by protective Purple Martins in Allen, and
heard a friend's duo's cool new song. All in all, a good day, though I wish I had done more chores. But there is tomorrow ahead.
Collapse