I had a charming fast food Japanese chicken teriyaki on my way to the Ontario airport. The airline spontaneously upgraded me to first class for the second leg of my flight. A curious incident happened in the row behind me on the connecting flight, as another passenger got escorted from the plane. I did not get the story. I had earlier seen the fellow in question circumvent the line to board a bit, though he did appear to have the necessary papers. But he had an out-of-place-and-pretending-to-be-oblivious-to-it about him. During the plane trip, I read a magazine article about why people and pets love each other, a magazine article about the Silk Road founder's criminal issues, and a magazine article about how infections may cause some forms of depression. During the second leg of the one-stop flight, I read "Dombey & Son" on my laptop. Dickens novels almost always work for me.

We landed at 2 a.m. I did not get home until 3 a.m. I devoted most of the day to rest and reading. My wife was off at 6 a.m., and gone most of the day, helping a friend of hers box some things for an apartment move. It rained again today, but cleared up by early afternoon.

I walked in Bethany Lakes Park. Though House Sparrows are a common, invasive species, I like to see the energetic group of them at this park. 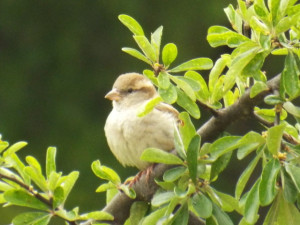 The little lakes at the park were full of water and surrounded by lush green plants. I ate a slice of cheese pizza, 1/2 pint of fruit and a banana at Market Street. I stopped by Green Park in Allen and watched American Robins and Brown-headed Cowbirds. 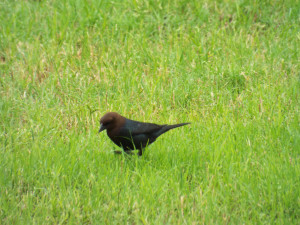 I took some video of three Brown-headed Cowbirds foraging, which I later edited in OpenShot video and posted to Flickr and Facebook. OpenShot is wonderfully easy to use. It still has a bit of crash-inducing instability, but like the old, early days of many another piece of software, one learns to save the project at each step to avoid this issue. I listened to music by C. Reider and Adam & Alma. During the afternoon, I also stopped by Russell Creek Park. I listened to a podcast from Radio New Zealand about a great bicycles-in-schools program for school kids to learn to ride. The bicycle minutes-rode-per-child stats there had severely declined, so it was good to hear of an effort to get people rolling.

I re-read Rumpole of the Bailey short stories and slept intermittently. At 7:30, I got up and sat on our small back patio with my wife. She was watching the flood of birds coming and going to and fro on our back fence. During the hour we sat outside together, we saw Northern Mockingbirds, a Brown Thrasher, European Starlings, immature American Robins, and Common Grackles. Perhaps I should put up a new feeder.

We dined at Rockfish, where I had copper river salmon. Tonight I donated to a crowd-fund to help chimpanzees on an island in Liberia. Then I went to the Locus website, found the title of an interesting new sci-fi/fantasy novel release. I then bought a digital version for my Nook app for my long-in-the-tooth but wonderful Pandigital Novel. I knocked out the first few pages. Soon I must sleep.

The rain finally ended. The weather site predicts the rain to be over for at least a week. I rode my bicycle up and down the Watters Creek Trail, a round-trip of 8.6 miles (13.8 km.) The pedaling took an hour, but I stopped to look at Blue Jays in DaySpring Nature Preserve.

I had a good Weight Watchers meeting, and then had chicken at Boston Market. Then I wanted to
go home and tidy up my car, but instead I turned into a limp noodle and fell asleep.
Collapse