Some weeks ago, I noticed a Memorial Day chess tournament in our area with a Game in 10 minutes time control. Though I do better at a slower speed, I like Game/10. I had planned to play in that one. But I decided today instead to focus on some Spring cleaning type of organizing. I spent the morning upstairs unpacking some boxes we had left packed from our months-ago home renovation. I got a lot done.

At eleven a.m., I got on Bethany Drive/Lucas Road to go to Brockdale Park. A mourning dove flew quickly right in front of my car and got grazed. The bird flew over the car, and was flapping on the roadway. After dithering about what to do, and generally feeling badly, I turned around at Brockdale Park to retrace my steps. To my surprise, I found that the bird was gone. I hope that means the bird was only stunned and flew off. But I don't know. My grill had only a single dove feather in it.

I walked a bit in Bethany Lakes Park, taking photos of ducklings. Then I went to the Bluebonnet Trail, where I saw lots of planted wildflowers, and took pictures of rabbits, an American Robin, a Blue Jay and a Western Kingbird. I had a vegetarian sandwich at Subway. I headed home and dealt with more boxes. I got a call about a work matter in the late afternoon.

My wife suggested we watch the movie "Paddington". We enjoyed it, but I had to pause early to have another work call. Meanwhile, the day turned, once again, quite rainy. We have had a very rainy Spring in Texas. Our area has had light flooding,but to our north and south there is heavy flooding. I was pleased with my restful Memorial Day, even if it featured no blitz chess and no three-day-weekend travel.

I like that this weekend that, even when I got a trifle down, I had my friend Beatrice to cheer me up. 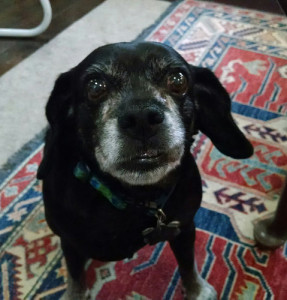