We awoke to another solid day of rain, which lasted from sunup to 2 in the afternoon or so. A few creeks near us had flash floods, such as Wilson Creek, but our town was not seriously affected. I drove to a couple of parks this morning, but it was too rainy to walk. I was driving to church when I started listening to an Episcopal sermon on the radio, which ended up being my observance. I also got a picture of a Western Kingbird hovering. I managed also to misplace something in either my car or my house, but I got through that. 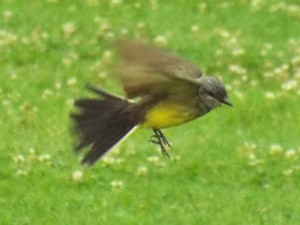 A dose of lightning had knocked out the computers at Weight Watchers, but a skeleton group turned up, weighed in on the one working scale, and had a little meeting. I gained a little weight, because I did not exercise in the rain (or indoors in lieu of the rain).

I had a sandwich for lunch, and went to Bethany Lakes Park. The Classwar Karaoke music compilation made an extra request for more videos this time. Usually, I just do an audio track. But I decided to shoot some footage. I had pondered for weeks what story to tell. I decided to just film the things I see when I go to the park, people excepted. I shot lots of video clips of birds and flowers and lakes and waving flags.

We went to Dickey's BBQ for supper. The news was full of a floodwater rescue in Sanger, Texas. Sanger was just a few miles from where I went for the bird walk on Saturday. I got out of there before the huge storm moved in. I was in a bit of it. Now it is causing flooding.

We came home and I worked on cleaning up my car. Our dog Beatrice, behind the fence, began barking a lot. My wife figured out a poor young baby bird was on the ground. She pulled Beatrice in. The prognosis did not look good for the little bird. But she gave the parent space to perhaps reclaim it. We'll see tomorrow if it was saved. I was pleased that Bea simply alerted us rather than eating the nestling. She is unpredictable--a bunny would have met a different fate, but her reaction to this one seemed like just letting us know.

I do not know if the rains caused it to fall, or if it faced some other crisis. These things are sad even if they are part of life. We had a similar storm crisis last Spring that some young bunnies did not survive.

I used Open Shot Video, a very easy-to-use video editor, to edit my film into a 3 minute short called "Parklife". I wrote a song for its soundtrack. I posted it all off to England via one of those file-sending services.

Tonight an Austin, Texas radio station called KOOP played my new song "Ramble" on the radio show "Fade to Yellow". I was delighted that it picked up the song for live radio. Another fellow who runs a great podcast wrote me tonight he will play some songs on that podcast. These things make me happy.

But I wish the bird had not fallen to the ground. This makes me sad.

I thought about my mom today, who died a bit over a decade ago. She was great. I wish she had lived a longer life, but I am grateful I had her well into my 40s.
Collapse