I got up at 5 something a.m. and got on the road to Denton County. I checked my phone' weather app, to find that the morning promised to feature a cessation between the previous night's rain and today's rain.

I arrived at Lake Ray Roberts at 7:20 a.m. The rains caused the lake to overflow its banks, but it did not overflow into the roads. It just made for some interesting visuals. 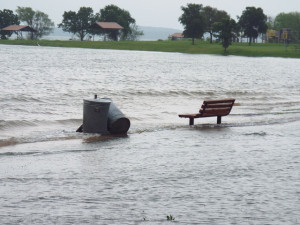 The day was overcast, as the promise of the late morning storm-to-come hovered overhead.

The bird walk started at 8 a.m., but I walked on my own for 40 minutes. I enjoyed the pair of Northern Cardinals. 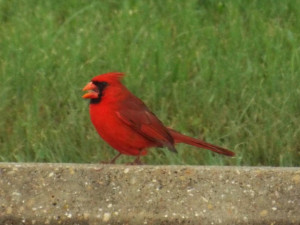 Although a few people signed up for the walk, the weather drove away everyone but Ranger Danielle and myself. At first, the walk seemed a bit slow, with common birds like Northern Cardinal, Scissor-tailed Flycatcher and Cliff Swallows on offer. But soon we hit a patch in which we stood by the Children's Pond and saw some migrant visitors: a Least Flycatcher, and two amazingly yellow warblers, some Wilson's Warblers and a Yellow Warbler. We used our respective cell phones to tie down our identification. I wish I had gotten pictures of these birds, but they proved too mobile for my camera skills.

I noted that my cell phone's weather application predicted a 98% chance of a storm striking our location by 10 a.m., an hour away. I know the hip thing to say is that cell phones ruin nature experiences, but in fact, having a small computer in my hand let us look up bird species and plan for when to quit in light of the coming storm.

We continued our walk, seeing, besides the usual, lovey suspects, a Spotted Sandpiper. The walk was great fun. At its conclusion, we watched a White-Crowned Sparrow foraging on and near a sidewalk, seemingly oblivious to us. 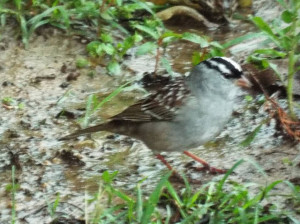 The rain was quite heavy during my drive home. Lightning striking nearby knocked out the gas pumps at once store. I limped my car to another station, making it there before the gasoline ran out. Then I drove the hour to my area, listening to a mixcloud podcast by Mike G. of the Ambient Music Review.

I stopped for lunch at Which Wich. Then I went home and rested while Star Trek: the Next Generation episodes played. In the early evening I took Beatrice for a walk. She loved it.

My wife and I were going to have dinner at Pollo Tropico, but the line was long and unhappy patrons were asking for refunds because the service was slow. In fairness, think it was the press of business rather than the staff. We went to Silver Thai instead, where I had monsoon rolls and stir fry chicken with oyster sauce.

Now we are watching Irene Dunne in "The White Cliffs of Dover" and enjoying the night.
Collapse