When I drive to or from work, I pass the Curtis Culwell Center, the event and sports place owned by the local school district and rented out to third parties. Usually,its signs talk about independent college conference basketball playoffs or a high school formal or graduation, particularly from the local rural high schools. I saw my nephew graduate with a combined high school/associate's degree from a neighboring community college there a few years ago. Some 700,000 people a year attend trade shows, sports contests, performances and church events there. Garland is just east of Dallas with a population of 200,000+. The city is diverse and largely middle-class.

I love Garland. I have worked here for nearly 15 years. I hike in its parks. I served as president of the Garland Bar Association some years ago. I feel at home in Garland. The city was one of two models for Arlen in the television show "King of the Hill".

Earlier this year, the Curtis Culwell Center attracted controversy, because an Islamic group booked a rally to support Islam there in a climate of anti-Islamic speech. Local protesters opposed to this made it a bit of a media event, protesting the group's use of the space. The school district pointed out, quite sensibly, that it cannot censor rentals based on religious content. As church groups routinely rent schools and auditoriums for services, school districts would be hard-pressed to deny religious groups access. The school district upheld the First Amendment.

There was nothing coincidental in Pamela Geller's group's choice to rent the center for a "contest" in which prizes were to be awarded for images depicting the prophet Mohammed. This was provocation, intended to draw a response. In this way it was similar to the Charlie Hebdo cartoons. But Ms. Geller's agenda is to attack Islam as a religion from a somewhat different perspective than that of Charlie Hebdo. I am not a fan of Ms. Geller's work.

Last night we learned that a quick-acting Garland police officer killed two men with assault rifles who wished to kill people at the event. The news reported that Garland Police, the center and possibly even federal officials worked together to
design a solution that provided security for the contest. The two assailants were felled by the first line of defense.

This visit of the objectionable-speech-v.-inexcusable-violence controversy to Garland brings a front-page story that often seems so far away to our suburb.
The perpetrators, according to the news, came from out-of-state. I am an unabashed supporter of free speech, even disagreeable free speech. I don't think anyone has a right to inflict violence over others based on cartoons. The fact that I reject Ms. Geller's group's hateful speech does not make me want to deny her the right to engage in it. But it is all more troubling than a community college graduation.

But enough of that. Here are Red Corn Poppies and an Eastern Bluebird from Breckinridge Park, about a five minute drive from the Culwell Center: 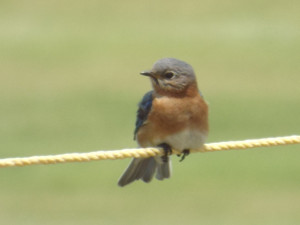