My sister called this morning and woke me. She called at an early hour that she felt safe for calling. She knows that I wake early most days. But this particular day she woke me. I got up and we chatted on various needful things for a good two hours.

In the late morning, I set out from our home to go to walking on the Watters Creek Trail. I kept a log of the birds I saw. I enjoyed the walk, which lasted over two hours. I saw 14 species of birds. The most secretive of the birds I saw, the Brown Creeper, lived up to its name, creeping up a tree. I saw lots of Yellow-Rumped Warblers and Carolina Chickadees, as well as two Carolina Wrens. Carolina Wrens often reverse the adage--they prefer to be heard but not seen. 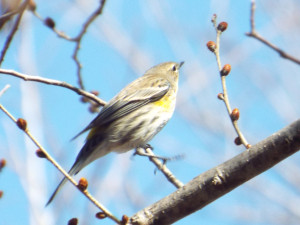 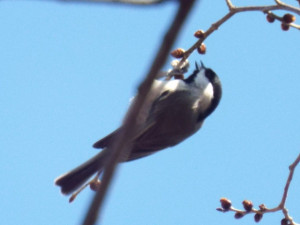 I went to Weight Watchers a quarter before two p.m. The post-holiday finally arrived. The modern post-holiday-penitent weight loss enthusiasts this year waited for Super Bowl Sunday to pass, before flocking to Weight Watchers. In prior years, January 2 marked the magic day. A woman ahead of me lamented endlessly about 17 dollars and 50 cents and the travails she had with signing in for monthly payments. I finally got to go inside the half-an-hour meeting ten minutes late.

I stopped by Pancho's, a fast-food Mexican buffet, for lunch. Prior to going in, I carefully worked out what fit with my 'point-counting' program. I managed acceptably,though not as pristinely as the ideal meal.

I stopped by Shawnee Park in Plano for a walk after my late lunch. I again kept a bird log. This time the highlight of the session proved to be a Yellow-Bellied Sapsucker. 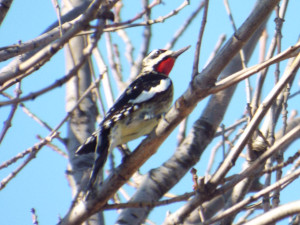 Then I drove home and took Beatrice for a walk. The weather crossed 21 degrees Celsius with the sun shining and the wind calm. We had the best time. Beatrice ignored both the passing dog that looked a bit like a more junkyard dog version of our junkyard dog, and shied away when a little boy wanted to pet her. Beatrice grows shy in her old age, except when terrorizing rabbits or other similar tasks.

I saw lot of ducks on the lake, and our neighborhood Northern Mockingbirds cavorted as usual: 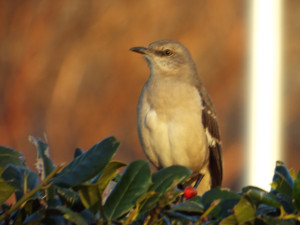 Meanwhile, I listened this weekend to the rest of the 6-CD unabridged version of P.G. Wodehouse's novel "Stiff Upper Lip, Jeeves". I enjoyed the reading by the late actor Jonathan Cecil. I love audiobooks, both when I have read the book and when I have not, but I like best light novels and narrative non-fiction when I "read" an audiobook.

Now we watch a British Baking show on PBS while we await the start of Downtown Abbey.
Collapse