The fellow I used to mentor through Big Brothers has a new job. We therefore had not gotten together for a while. He sent me a Facebook Message last night that he had Saturday off. We got together today and did some walking and some shopping. We ate at a place called Best Thai that was in fact among the best Thai I have had in north Texas. I was delighted to tell my wife about it, but it turned out she had already
eaten there, as it is near her work. She shared my high opinion.

During my time with my friend, I saw this Gadwall Duck and this Yellow-Rumped Warbler, both in Bethany Lakes Park: 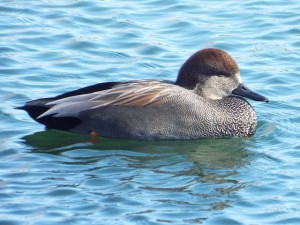 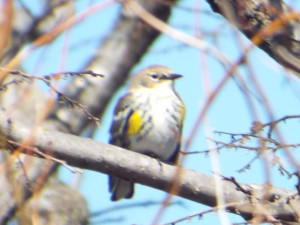 Turtles sunned themselves. We even saw a dead snake in the water, very rare in Winter. I suspect it came out during a recent warm day, only to be ill-preparedor the evening cold.

I took Beatrice for an afternoon walk in the 20 degrees Celsius weather. She loved it. She liked the dog who passed by but was prevented from getting two close. Bea and that dog exchanged chivalrous barks, like two nights on passing steeds.

My wife and I headed to the Heard Natural Science Center in the late afternoon. As promised, the weather turned balmy if breezy in the afternoon. We walked among
dozens of Red-Winged Blackbirds. A Red-Bellied Woodpecker proved quite vocal: Tonight we went to a dance performance at the Eisenmann Center in Richardson.The troupe performing was the well-known dance group the Paul Taylor Dance Company.
The first piece, "Diggity", was a playful celebration. The second piece, "Beloved Renegade", was a Walt Whitman homage with lots of contemplative themes about death.
The third piece, "Cloven Kingdom" featured a great juxtaposition of the music of Corelli, Henry Cowell and Malloy Miller. I particularly enjoyed the choreography to Cowell as the theme of the primal nature of civilized people is powerfully put forward.

We enjoyed the performance very much. Our assigned seats were in the loge section Loge seats are usually my favorite at the Eisenmann. Tonight, though, our seats were
too far to the right. After the first dance, we switched up into the center of the nearly-empty Mezzanine. These seats were nearly ideal. I wished I had bought the somewhat less expensive Mezzanine seats before we went. I know a bit better now.

We stopped by for a late-night frozen yogurt, and are now at home and happy.
Collapse