Today I ventured into the cold at Noon to look to see if I saw any birds in Breckinridge Park.
I found Blue Jays in the bare branches. 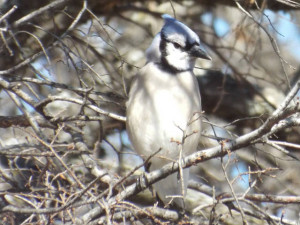 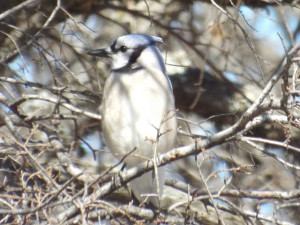 Tonight my wife had a meeting. I drove to our new Denny's restaurant. Denny's, unlike recent openings of In 'n' Out Burgers and Pollo Tropical, has not been mobbed with customers. This chain has an ample north Texas presence already. But the new Denny's features a pleasant, modernized look and a prompt and courteous staff. Denny's now has lots of menu items that fit with Weight Watchers menus, so a good time was had by one. I read the Texas Parks and Wildlife magazine while I ate. The woman waiting on me impressed me when she advised that it was her favorite magazine.

When I got home, I gave Beatrice her medicine, and then threw her Stuffed Carrot and her
Stuffed Chipmunk ("bring me Chippie!", I call). Then I went upstairs and turned on my desktop computer. First I updated it. Ever since I switched to Peppermint operating system, updates have been a breeze.

Then I began to create a song for this quarter's Classwar Karaoke compilation. I have released on some twelve or so editions of this compilation netlabel album project. I like it because it draws a good listenership, the other musicians make interesting pieces, and it's very free form.

Tonight I found myself making tinkertoy music, which is my term for when I make a species of novelty music inspired by childrens' songs. I am not so fond of making music for children, as in making music that sounds like it was made with tinkertoys. I gave this particular 150 second tone poem the name "Little Park Train", because, well, that is what it is about.

I must soon peruse the sci-fi best of lists again, as I am now officially between novels.
Collapse