This morning I read a column in the magazine Arkansas, the alumni magazine for
my university. The column praised a long-standing university administrator. When I knew the fellow, he was a physics professor and the head of the physics department. I recall Professor Pederson as a pleasant man,though I did not know him well. I was just one of a number of students. I believe he served as the professor for my Electronics class, a curious self-directed six-credit-hour program that took me and many of my fellow classmates several semesters to complete. We all stopped in a little lab room in the basement and assembled Heathkit projects, culminating in building little binary computers out of plug-in wires, transistors and capacitors.
Dr. Pederson was a polite, likable fellow.

The physics department at the University of Arkansas was my first introduction to university life. I was selected to got to a science Summer camp when I was 15. I stayed for some weeks in a dormitory in Fayetteville, some two hundred sixty miles from my home. I learned about Fortran programming for computers, using huge decks of cards with holes punched in them to run "hello world" and simple clown drawing programs on massive sheafs of green-and-beige computer paper. I attended classes in other areas of physics. I remember one of the camp counsellors was a physics teacher from Little Rock with an interest in things we now would call New Age. I remember one fellow wore a bath towel as a cape and made Underdog jokes. Another fellow was a bit of a bully. I've lost touch with everyone at that camp--I don't remember the names of the other students.

When I went to university, I knew the physics department and physics seemed like a good major for me. I took a bachelor of arts program rather than a bachelor of science program, as I wanted to take pre-med electives. My grades were not high enough to try for medical school, so eventually I used my arts electives to take English literature courses. I had really enjoyed my literature courses, and wanted to take more courses. My adviser, Professor and jazzman Art Hobson, had written the textbook everyone called "Physics for Poets", because apparently poets were allergic to math and difficult concepts. When I told him of my intention to take English, he called the head of the English Department, and got for me a list of courses to take. I am, I believe,the only physics graduate of my university whose "special emphasis area" (the phrase they used instead of "minor") was English literature.

The physics building was down a hill on Dickson Street. Before its life as a temple of science, it served as a cinder-block HVAC building for the campus. Its walls were painted in faded pastels, much like elementary schools in urban areas. It was a truly grand place, in its way.

I lacked much aptitude for physics, but I soldiered through to a degree.The analytic thinking I learned there helped me in law school, where I excelled. I am still in touch with at least two people with whom I was a physics student. One woman became a plastic surgeon. Another man got his Ph.D in physics and became an actual rocket scientist.

With hindsight, I wish I had studied my math and my science more assiduously. But hindsight is really beside the point. My university gave me great opportunities. I did not entirely waste them. That's really all I need to know about all that for now.

Today involved a flock of American Robins, a cup of hot chocolate at Caffe Promenade, and buying two tickets to the symphony on-line. 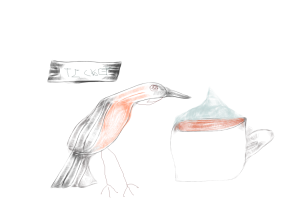