This morning I rested a bit longer than usual. I read a goodish set of pages of the novel upon which I am working. Then I wrote out some checks for some bills and a deposit slip for a deposit, and drove it all over to the post office. The chilly morning warmed up to 10 Celsius (50 Fahrenheit). I took Beatrice for a walk. A family was walking its beagle, which tried, despite being on one of those endless extensible leashes, to give Beatrice a piece of its mind. This was like sweet honey to Beatrice, who barked back and gave that beagle a piece of her mind, but only a small piece. A good time was had by all. I took a picture of a Northern Mockingbird: 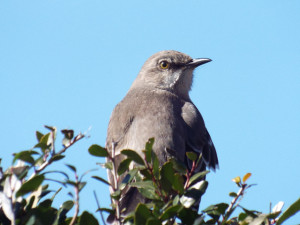 I went to Half Priced Books because I had a five dollar credit slip for there. I got a 6 CD reading of a Wodehouse Jeeves book, as well as books about hummingbirds and about birds of Mexico. I went to Whichwhich for a sandwich, where I read the chapter about seeking the endemic Cozumel Thrasher, who sounded a lot like our Brown Thrasher, only more Cozumellian. I also listened to the Arkansas Razorback men's basketball team play a similarly-gendered team from the University of Missouri. I was able to listen using a phone app called TuneIn Radio. I only listened to half the game.

Then I went to Dollar Tree and got a note pad. I drove to Limestone Quarry Park. I put on my Big Lots huge white over-ear headphones, and played a Mixcloud cloudcast called This Week in Computer Hardware. Usually, this show features talk about computer components such as GPU which cost more than I play on eBay for entire computers. But this time it had a great spot about the new little fitlet PCs, which
are more within the ken of things I might one day own. The weather turned delightful, hitting 15.55 degrees C. (60 degrees F.).

During my walk, I saw lots of Yellow-Rumped Warblers and a goodish few Northern Mockingbirds, Northern Cardinals, and Dark-eyed Juncos. I took some photos, but none really worked as well as they might had I taken better photos.

My wife and I headed out for sushi at Umeko in Plano. The service there is excellent at this Taiwanese and sushi restaurant. We left the restaurant well pleased. I will read my book tonight, and perhaps listen to and even make a little music. The night is only well-begun.
Collapse