Last night we met my nephew and his girlfriend, my brother and my sister-in-law at the hibachi restaurant Japon. We gathered to celebrate my nephew's birthday. I got him a card which included a button to the effect that its wearer did not know the people around him. His girlfriend baked a celebratory apple pie. The restaurant kindly let her serve it.

My cold is discernibly receding. The sore throat is gone. I took Alka Seltzer Plus again. The tablets dissolve in water. They taste vaguely of strawberry but are labeled orange. I had a flash of memory of a beloved drink called Fizzies. These were also tablets that dissolved in water to create a soft drink. I miss things like those and Tang and space food sticks. At least in Canada they still have that chewing gum that tastes like soap.

I felt much better today. Soon I will be back to normal at this pace. At lunch I took a quick walk in Murphy City Park. The city seems to be doing some improvement of the park, but its main symptoms now are lots of things dug up that used to be not-dug-up.
The weather was temperate. Eastern Bluebirds were around: 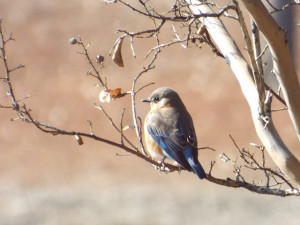 Tonight I grabbed a sandwich and did the Dallas Volunteer Attorney Program Garland legal clinic. I met with a good number of good folks.

I stopped by Kroger on the way home to replenish my raisin bran stocks. As I pulled into the parking lot, the radio played Alanis Morisette's song "Ironic". This intriguing pop song was so popular one year it was overplayed, and yet now is relatively rarely heard anymore.

I am trying to install a musical instrument program that someone wants to test in Ubuntu. So far I fear I have not gotten it right. But we'll see.
Collapse