The rain finally fell this morning, but the temperature stayed well above freezing. I got up and listened to ambient music. I saw an interesting five minute sci-fi short on Vimeo. My wife and I watched news reports from Paris with rapt attention. I began to watch the sports contest on television between my home town team and a team from the Milwaukee suburbs. It had reached half-time when I needed to drive to my Weight Watchers meeting. The attendance at Weight Watchers was lower than the usual January surge, due to the game and the weather. I put my cell phone browser on ESPN and watched its Gamecast give the play-by-play. I finished the game after the meeting via radio. The home town team lost, but the game was competitive and satisfying.

I stopped at Whichwhich for a sandwich and baked chips. Then I drove to Limestone Quarry Park. The temperature had risen to a little under 4 degrees C. (39 degrees F). The sky was overcast, but the rain had stopped.

I walked for an hour. This year, my goal has been to wear layers upon layers of Winter clothes. This stands in contrast to my normal 'get acclimated' mantra. I figure in life I am acclimated enough.

I walked on the park's Taychas Trail, a sidewalk trail. As I walked, I listened on my huge white over-ear Big Lots headphones to the We are All Ghosts 2014 year-end compilation. I passed a man about my age, pushing a perambulator. As the weather was cold for infants, I looked to see if he had a baby or a pet in the pram. I could only see blanketing.

I saw eight species of birds, but many individuals within the species. I saw an Eastern Towhee. I came upon the man with the pram--it turned out he was a birder, too. He asked me "did you see the Towhee?" I said "Yes! Is it a spotted?". No, he replied, an Eastern Towhee.
This sighting is not a "rare" bird but it is more uncommon. I told him I also saw lovely white-throated sparrows. He said he always saw those. He and I differ in that I deeply love birds I always see. I liked the two American Crows who mobbed the Red-Tailed Hawk.

Here is a White-throated Sparrow: 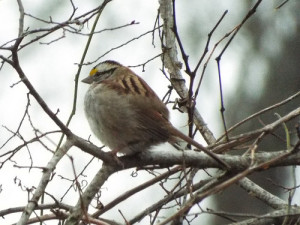 Here is a Dark-Eyed Junco, one of many I saw: 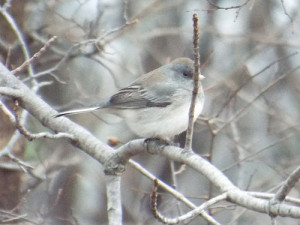 Here is a gregarious Red-Bellied Woodpecker: 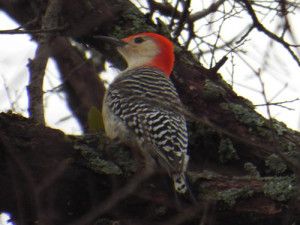 My wife cooked up a lovely Navy Bean Soup with pork in it, along with corn muffins. I listened to OO Radio, a netlabel-oriented radio station. In addition to music, this episode featured readings from Joyce's "Ulysses".

I have a trace of a sore throat and the first hint of sniffles. I am nonetheless in a good mood.
Collapse