"Canis Paradiso
"We have a new friend. We think her name will be Beatrice. She's all black like a little labrador, but she's of no certain origin, six years old, and only weighs sixteen pounds.
She has a little kink in her tail, as if someone folded the origami slightly wrong. She loves to sit in one's lap. Tonight we have been learning the difficult lesson "doggie doors and how to use them with aplomb". Our dog Ted is quite comfortable with her, having met her on neutral ground at the McKinney SPCA. The SPCA did not know her name--she was a stray foundling--so we have to teach her the new name. She knows two words, as near as I can tell--"fetch" and "ball". At the very impressive McKinney SPCA facility, her rap sheet included a post-it note in a rather girlish purple that said it most simply: "Very sweet".

Today marks nine years since we adopted Beatrice, whom the shelter estimated to be
six years of age at the time of adoption. For years, people mistook her, as we originally did, for a black labrador puppy. Now passersby ask "how old is she?" with a kind of awe.

Beatrice is still a very playful girl. Her favorite toy is a toy chipmunk. Her second favorite toy is a toy carrot. Her favorite activity is chasing a jetstream of water hose water. Her second favorite activity is taking a walk. She knows a small group of words: sit, down, stay (rarely heeded), walk, ball, fetch, toy, carrot, rabbit, chippie, go outside, back yard, medicine and treat. She is shy with other dogs, fond of children, and a menace to rabbits.

We learned from Beatrice that we will probably always get shelter dogs from now on.
We also learned that one need not adopt a puppy dog to get a puppy-like fun-loving dog. It's a good Beaversary. 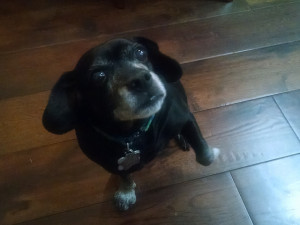