Last night my wife saw me start to wrap my Christmas gift for my young friend, and graciously offered to do the job. The results were pleasing. 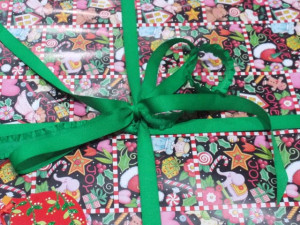 I fell asleep while watching the 1935 "Christmas Carol". I woke up in time to pick up my friend at 8 a.m. The weather was chilly, the sky was overcast and the air was full of moisture. We first went to the post office so that I could mail some holiday cards.
I stopped by a Wal-Mart in Lucas on the way to get stamps, so that we did not need to go into the office. Then we went to Market Street and ate oatmeal.

We decided to walk in Collin Creek Mall. I was surprised that the mall was not crowded for the holiday. It was only pleasantly busy. My friend got a new case for his cell phone. I was impressed how the clerk who waited on us meticulously attached the case to my friend's phone. After walking for over an hour, we went to a store called Movie Trading Company in Plano. This store proved to have a large CD collection, including five rows of metal albums, my friend's favorite genre. He got a metal CD and a discounted DVD about a television program, while I got a documentary DVD about fractals.

We went to Firewheel Coffee in Garland, where my friend had a pumpkin latte and I had a hot chocolate. My friend ripped some songs from his CDs. I read up on cell phone specs.

We then went to Grand Asian Buffet for lunch. I opted for Mongolian BBQ, which the grillmaster cooked with aplomb. After lunch, we walked in Bethany Lakes Park in Allen. A world of grown men were fishing one small pond, a sure signal that the city planted trout there. Trout do not really belong here, as it is too warm in the Summer for trout. But cities in this part of Texas plant them in local ponds for Winter fishermen. On a non-fished pond, I saw northern shovelers, lesser scaup, mallards, and American coots.

I drove my friend to his home and was pleased to present him with well-wrapped gifts I pulled from a hiding place behind my passenger seat.

My wife and I tonight went to see "Wild". My wife had read the book a few years ago.
I avoided the book, despite its hiking theme, as it sounded like a narrative that would only partially resonate with me. I loved Graham McIntosh's "Into a Desert Place", a hiking narrative about a walk around Baja California, but Cheryl Strayed's narrative sounded like it had all sorts of odd narrative elements.

We really liked the movie. Reese Witherspoon did a good job in the lead role. Though I still will not be in a hurry to read the book, I felt more in sympathy with Ms. Strayed's story.

We dined at Rockfish Grill,where I had grilled shrimp. Now I am watching the local high school sports team seal up a state championship in a rare televised game. It's been a pretty good day.
Collapse