Last night we watched "Peter Pan Live". Today I read the reviews are very mixed--and mostly lukewarm to negative. But we thought it was fine and a good watch. Allison Williams had quite a task to try to do Mary Martin's role, and gave it a game try, while Christopher Walken amused each time he came on screen. It was all a reasonably good show. My wife made the good point that these live musicals would work better if they were shot in a theater. I am intrigued, too, by the way social media creates a new meta-layer of irony within irony. We thought it was all fine. On the other hand, as we were recording, we switched in mid-stream to watch the sports contest on another channel. So maybe action is editorial. I'll watch it all on DVR later.

I am always amused by media quirks. Some of my favorite holiday and childrens' movies have curious pasts. "Miracle on 34th Street", 1947,was in its day condemned by the "Legion of Decency" because its lead female character was divorced. "It's a Wonderful Life" lost half a million 1946 dollars at the box office in its initial run. "Willie Wonka and the Chocolate Factory", 1971, made a little money and got some nice reviews,but was disowned by the novel's author Roald Dahl. "Yellow Submarine" was a commercial and critical success as a Beatles movie though the Beatles did not provide their characters' voices. The list goes on.

Today when I went to the park the weather was warm but the day was cloudy. Uncharacteristically, I did not see the bluebirds and finches and winter-season warblers I usually see on warm Winter days. Then I saw a little raptor in a tree and I understood. I puzzled and puzzle over whether the little female raptor was a merlin or a sharp-shinned hawk, but I voted the former. 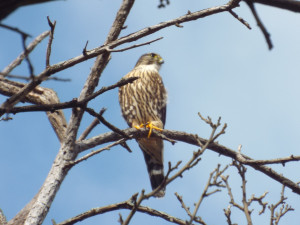 Tonight I ate cheese pizza. I walked the dog in the dark. My wife just found the
on-line video about the great horned owl driven into a Great Lake by two peregrine falcons. The news is full of the dismaying stories of excessive or tactically unnecessary police force and the resultant protests.
Collapse