I worked until the very late morning, when I drove to catch a flight. The snow was patchy on the desert mountains. When I landed in the late afternoon, I decided to go to the park. Chace Park in Marina del Rey is a very small park with some trees, some lawn, some walkways, and a good view of the small boat waterway of Los Angeles' Marina del Rey. When we lived in Los Angeles, over 14 years ago, I used to fish from a little fishing pier at that park. I remember full-moon late nights there, and the first fish I caught, a good-sized jacksmelt. I always caught and released.

Yesterday I took my camera and binoculars. I took pictures of this little fellow: 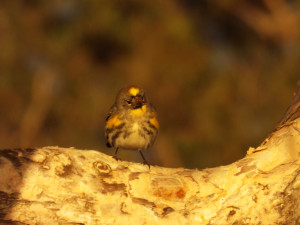 Similarly, this little bird's identification has eluded me so far: 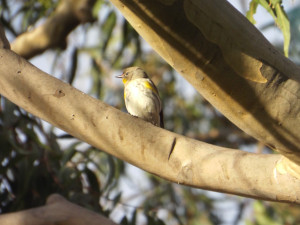 I browsed the internet trying to get an identification, but I am working on it yet.

I fell asleep fairly early, woke extremely early, and got a little work done.
Now I am about to get up and face the bulk of my work day. I have a flight back home this afternoon. I enjoyed being in 70 degree Fahrenheit weather again yesterday, but the cold snap at home broke and things are back in the 60s. So the weather is all good.

I sat down yesterday before work and created a song for the Classwar Karaoke
compilation, a quarterly netlabel release. I had limited time, and I wanted to see if I could create a song in a short period of time. I succeeded, though with hindsight I would have refrained from some effects I added to the audio as they seem to have created one artifact audible near the end. Meanwhile, I see that
the starfrosch netaudio site built a "top 100 ccMixter" type page and my
song "Maisie's Dream" is currently number 1. Those kind of charts, though, while fun, are just charts based on algorithms. I won't have to worry about whether to post my music in Spotify any time soon. My own view,by the way, is that streaming is fun. My favorite way to stream is via Bandcamp app from Bandcamp releases.
Collapse