Today the rain continued to fall. I hope that the portents of a cool, wet Autumn and Winter continue to come true. I like cloudy days with bits of rain. I used my absurdly large London Fog umbrella, a thing more suited to foursomes than onesomes, but quite useful. 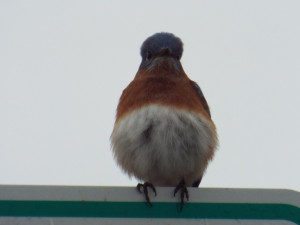 I followed the election results last night. They came out roughly similar to past mid-term elections of an incumbent president's second term. The news media speaks of the result as if this shift of seat to the party opposing the incumbent president amounted to something new and completely different than usual. The news media did the same thing years ago during the previous president's second term. Only the 1998 mid-term did not feature this kind of shift of seats in recent time, but the media reports things as if the results were unprecedented.

As a moderate blue voter in a mostly red state, I watched my local state-wide candidates get beaten. I did want one Republican running for election one county over to win her election, which was the only non-blue moment I had this election. She won.
Also, I was intrigued that the nearby town of Denton managed to ban some local fracking despite a huge oil industry expenditure to fight the measure.

My wife went to dinner with a co-worker. I watched a nature special about sloths
Collapse