I began to convince myself to get tickets to a Ringo Starr concert, but then I realized the concert was on the Saturday just past. I was hoping to hear Todd Rundgren perform, so it was a bit of a mild disappointment. The weather is nearly perfect, if one discounts a bit of breeze. I saw a rather yellow-ish eastern phoebe and then almost convinced myself it was a Wilson's warbler. I signed up recently for nanowrimo, my first time to do this project since I completed a bad novel in 2002. I'd probably rather write a non-fiction book about birding our local parks, but I'll see if I can write a novel instead.

I got up early this morning and got some paperwork done. I ran into an obstacle with getting gnumeric to auto-sum, but then I read the manual. So many problems with software are not software problems but user problems. On a related note, I got instructions from my hardware vendor on how to start to solve my hard drive issue. Tomorrow morning I will implement the first diagnostic step.

I watched the Kansas City Royals win their third AL championship series game. A fellow who plays football for our local professional team for a salary of $495,000 a year got arrested for shoplifting items of relatively nominal value. The local nurse who contracted Ebola from her patient is much in our local news. It's such a difficult thing to happen to a caregiver.

Lately I love the Harmony chrome app drawing program, as well as the thought of making Saturday productive. 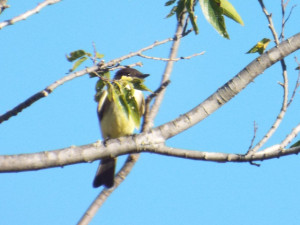