Friday night I stayed up until midnight, apparently solving the problem with hard drive corruption on my computer, and then installing my favorite programs onto the computer. Saturday morning all my work proved to be for naught, as the computer, having booted well on Friday night, pronounced itself bootless.

I set aside that worry, fired up my laptop, and began to do some family business paperwork. I made a lot of progress, until 7.30 a.m. rolled along. Then I drove to pick up my young friend. We had originally planned to go fishing, but mildly rainy weather and his recent recovery from a spot of flu-like symptoms changed out plans. We drove to Cedar Hill State Park, and walked around a bit at the Penn Farm, a set of original farm buildings by the family who settled what one day became a nice lake state park.

I bought the new Cousin Silas CD recently from my favorite ambient music label, We_are_all-ghosts. The label asked each CD buyer to post a picture when the CD arrived. I had my young friend take this picture of me with the CD: 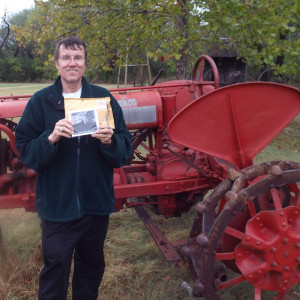 I found it intriguing to see a picture of how the cut from my fall a few weeks ago looks from the front--it is a better gauge for me than a mirror. The scar is neither as prominent as one it was nor as receded as I think it will eventually be. I made a few minor changes suggested by the doctor in the way I do things, by the way, and this seems to have nipped the problem giving rise to the fall in the bud.

We went to Forever Young records, the massive CD, LP and cassette store in Grand Prairie. We
drove to a Barnes & Noble and each got magazines. We ate at China Sea--I had a lightly-oiled
Mongolian BBQ.

After I dropped my friend off, I stopped by Brockdale Park and watched woodpeckers and northern flickers frolic in the lovely Autumnal weather. Then I drove to Microcenter, a technology sales store.

While I am sorting out this hard drive corruption issue, I have been relying on a second-string desktop which is fine for 'net surfing but inadequate to create music. I decided that I want to always have a back-up desktop capable of making music. I first sat in the Microcenter parking lot and searched refurbished desktops which were sufficiently old to be low-priced while sufficiently powerful for my intended use.

I found several with sufficient CPU power and memory for the kind of lightweight to moderate weight audio rendering I do. Then I searched to see if any had particularly bad or good issues with Linux compatibility. Linux compatibility used to be a huge issue, but that's all changed. Most linux distros load very well on most modern computers. It's no longer much of an issue anymore. Still, it's nice to know of any hardware quirks. My research led me to the Lenovo ThinkCenter M58. It is a small form factor desktop. This work outs well for me, because I prefer those. They are often available because offices often lease them and then they hit the resale market. On the other hand, gamers do not favor them because they are not ideal for packing in fans and extra graphic cards.

I got the computer home, replaced Windows 7 with PeppermintOS and loaded on my favorite programs. The music programs play seamlessly. I am excited to begin composing on this system.

In the meantime, I hope to get my first-string computer back into good shape. I suppose I could just break down and replace the hard drive, which would like be more inexpensive than the time and effort to re-format away the corrupted master boot record that seems to be the issue here.
But then I would not learn anything. Still, my patience is not infinite, and perhaps all those sales I keep seeing on SSD drives will cause me to replace my uncooperative hard drive and just
re-drive to restore my computing drive.

My wife's hometown team, the Kansas City Royals, won a baseball playoff game tonight, while my alma mater, the Arkansas Razorbacks, lost another close game in a heartbreaker. I took my dog Beatrice for a walk in the early evening. She loved to run in the cool, cloudy air.
Collapse