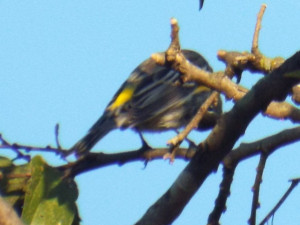 Harbingers of Fall come in many flavors. Here in north Texas, Falls bears a yellow rump. The yellow-rumped warbler arrives from a Summer in Canada or the United States Great Lakes region.
Its winter plumage lacks the elaborate beauty of its breeding range. But the unmistakable yellow rump persists all Winter, like a bellwether of life's abundant color amid the seeming drab prior to the solstice. This warbler, like any good Canadian, finds north Texas in Winter a relative burst of resort weather.

This morning I hooked up my second-string desktop, a small form factor Dell Optiflex 160 that I got in eBay for very little money. I intend to one day make it a kind of media center, with one of those connections to my television. But today it makes a fine desktop substitute, like a less talented second-string athlete called upon to take the play-caller's role. I loaded onto it Peppermint 5 O/S and my favorite open source software: Libre Office, Pinta, Inkscape, Audacity,Gkrell Monitor, WINE, and Xaos. Soon I will try to configure some software synthesizers onto the system.

Tonight a walker with her dog stopped me to ask if I am a bird-watcher. I helped her confirm that she had seen a hawk, and that the small falcon-like creatures were American kestrels. Her large long-haired dog seemed unimpressed, but she thanked me graciously with a "cool!".

I saw bluebirds and house finches in addition to the warbler. My wife won a nice little honor at work. We ate hot dogs and sauerkraut for dinner.
Collapse