The storm arrived around 4 p.m. By 4:45, the sirens alerted us to head to the storm shelter. My office is in a small office building next to a shopping center.The shelter is a window-less hallway between two stores. No tornado came, but the wind blew vigorously. I got drenched in rain walking the short way to the shelter.

The alarum resulted from "straight line winds", those high-speed alternatives to funnel clouds. The episode ended in thirty minutes, with signs blown down but no damage done. I drove by Bass Pro Shop store on I-30 to see a bass boat had been blown downhill.

I stopped by Elgin B. Robertson Park, a huge, open space park by Lake Ray Hubbard. I daydreamed all week about birding there before my local bar association meeting. But I did not daydream of birding after a storm. A picnic table had been blown in the middle of the road. A flock of scissor-tailed flycatchers enjoyed the post-storm relative calm. This time of year, the scissor-tailed flycatchers migrate here from Kansas, Nebraska and Oklahoma to join our local population. Thus, the trees are all a-scissor. In a very few weeks, they will all leave for South America. But we'll still have bluebirds. 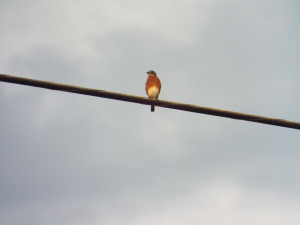 I had hoped to see migrating white pelicans on the lake but they fished other waters than storm waters.

I got a call that the Garland Bar Association meeting got cancelled. I went to BBQ chicken at Dickey's BBQ. I got an e-mail that an aunt is very ill. I drove home.
Collapse