I took Beatrice for a morning walk among blue jays, mockingbirds, and western kingbirds. When I got home I saw a northern mockingbird singing in my neighbor's back yard tree. Like so many mockingbirds atop small trees, it assumed an attitude of bold, unbowed prayer. I drove to my office, enjoying a nice talk with my sister after I parked. I also listened to Radio New Zealand. That station announced that the blaze of a media event sponsored by Kim Dotcom, with the aid of Julian Assange, Glenn Greenwald and Edward Snowden devoted to last-minute alleged disclosures at an odd "Moment of Truth" not only did not impress the electorate, but in fact appeared to increase the government's vote count.

I infer from this that lots of people, like me, are glad to have attention focused on privacy issues, but find some of the folk heroes of the moment less than entirely impressive.

I worked into the early afternoon on things I wanted to get done before Monday. Then I headed to Breckinridge Park in Richardson, where I liked looking at an eastern phoebe. Eastern phoebes are year-round birds here, but we see far more in September when both migrants and residents are here. 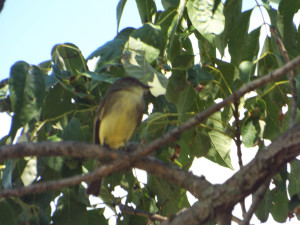 I drove to Dickey's BBQ and had grilled chicken, green beans and corn on the cob. Then I drove home and rested with the TV on all afternoon. I was pleased to find my charging cord for my e-reader, which had been packed as part of the renovation. I set up my little pandigital tablet/e-reader to charge, so that I can soon resume the novel I was reading on the plane last night when the charge hit 5%. Though all my life I have been a fiction reader more than any other genre, recent months find me reading more non-fiction, how-to and bird information surveys. I plan to balance that out with more fiction again.

My wife spent the day with a friend at the Gaylord, a local resort, using massage gift certificates that I had gotten for her for last Christmas to permit just such a womans' day out. I went to dinner at Texas Land and Cattle with my brother and his wife and my nephew and his girlfriend. I had a tasty bit of salmon with asparagus and broccoli. Now I am watching the Arkansas Razorbacks win a football game on television, and am glad that I elected to rest this weekend.
Collapse