A light rain last night broke the heat. I saw this American kestrel,standing atop a reserved parking sign: 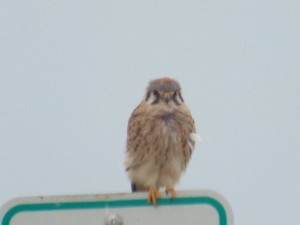 I woke early this morning to find extensive social media coverage of the Oskar Pistorius trial. I am a civil lawyer,and not a South African lawyer. But the concepts are sufficiently analogous to what I know to make me a bit more fluent
in the concepts than might be a local layperson. The judge's decision halted after one day, prior to getting to the charges more likely to draw a conviction. I wondered only a bit at the judge's decision to adjourn her ruling. I find in life it is never a good idea to wonder much about the ways of judges. The case itself has all the interest and uncertainty attendant upon a case with abundant dollops of limited evidence.

At the end of the day I saw this scissor-tailed flycatcher: 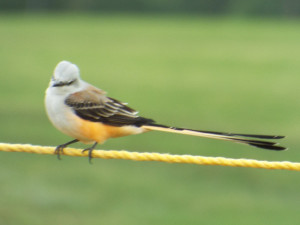 I heard from my sister,whose husband had an accident just after the Tuesday funeral that thankfully could be repaired with stitches. I heard from my father's wife's son, who sent us a nice note in the wake of the funeral.

I'm interested in the Scottish independence election. I can see the arguments on each side of the issue, but I am mainly glad that Scots get to decide the question.
I'm also following the imminent New Zealand election,where the favored ruling party's Minister of Justice apparently allegedly leaked information to a right-wing blogger to try to undermine a Serious Frauds Office chief.
Collapse