My father re-married near the end of his life. His wife, a charming woman, was, like him, in her 70s. Her daughter was a year ahead of me in high school. Though Suzanne
was literally my step-sister, the circumstances made her more like a family member called "my late father's wife's daughter". Suzanne had a good heart and a great cat named Xerox. My wife and I liked Suzanne very well, and my wife and Suzanne were quite close.

Suzanne suffered a debilitating stroke seven years ago. Rather against the odds, she survived the stroke and gained a lot of her life back. Still, she faced various disabling things and had to struggle to keep her health and her independence. Friday her struggles ended. We attended her funeral Tuesday.

The funeral was a lovely service. Afterward we gathered in the church basement with the attendees for punch and cookies. I spoke with people I had not seen in years.
A lot of people turned out for the service in a small Arkansas town on a weekday.
After the reception, the family members gathered at my father's widow's home. We ate a bit and called it a day. My wife and I drove a couple of hours down the road, and stopped at Mount Pleasant. We drove the rest of the way home this morning. We picked up Beatrice, who was delighted to see us.

I went to work this afternoon. Before I went to my office, I stopped by Breckinridge Park. I saw lots of bluebirds. I also came upon this hawk. I think it is an immature red-tailed hawk, though it may be the confusingly similar immature red-shouldered hawk. It let me take lots of pictures of it. It was a lovely hawk. 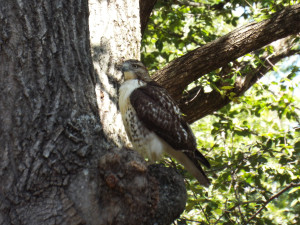 I went to a Wednesday meeting of Weight Watchers. I lost four tenths of a pound, which is okay for a post-funeral weigh-in. I watched a television program about otters and felt glad to be home.
Collapse