During the lunch hour,I ate at a nice little place called Fang Chinese. I had a good chat with my sister. Then I stopped at Timbers Nature Preserve, a Murphy city park. I saw a pair of kestrels and a Cooper's hawk. My photos of these rapturous raptors failed to capture them. I had a modestly late call at work tonight. I stopped by Breckinridge Park in Richardson, where I saw this immature bird: 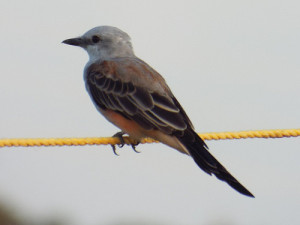 I think it's an immature scissor-tailed flycatcher rather than an immature western kingbird.

I stopped by One Eleven Ranch Park in Garland, just down the road. I saw two eastern phoebes. I love these dark little birds with their flicking tail feathers. 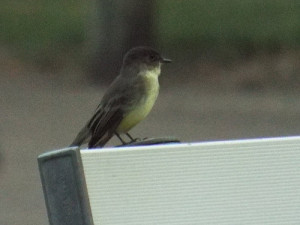 I listened to Radio New Zealand on the drive home,until I switched to AM radio. I found, to my surprise, that college football games were in session. Football viewing is a guilty pleasure, but I suppose it beats cigars. I am concerned about events in the Ukraine, where Russian volunteers appear to be escalating the conflict.

If I could have a super-power, I'd choose the power to heal.
Collapse